On Saturday the Friends of Earlham Cemetery held their October guided walk, which as in past years was focused on fungi. To this end the Norfolk Fungus Study Group had agreed to join the friends and hopefully boost the cemetery fungus list. Details of the walk had also been shared online, so a rather large group of people met at the cemetery gates (a sentence that even after several years I still say to myself in a fake Morrissey voice*). Warning, the following account is largely a glorified list of fungus names.

After a brief introduction we set off around the corner, noting Meadow Coral, Deceivers and Death Caps on the way. Working our way along parallel with the drive we saw Leopard and Scaly Earthballs, Xerocomus sp, Grey Coral and Lilac Fibrecap, before going to have a look at the Ramaria flaccida coral that is fruiting well this year. The group was already starting to spread out as we looked at Blue Roundheads, Conifer Cone Caps and Velvet Shank. 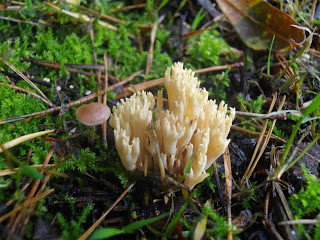 After sheltering from a heavy shower we continued, seeing a white clump of Milking Bonnet amongst the standard form, plus a Poison Pie sp (Hebeloma mesophaeum) and Agrocybe erebia. A milkcap under Hornbeam was a new one for me, Lactarius circellatus. These walks tend to last for around two hours, but it was already gone 12 and we hadn't reached the other half of the cemetery yet. Some people left, but the core group carried on into the western part, which has had less recording done. 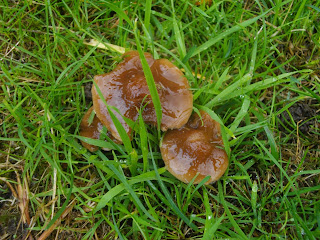 We carried on around the edge of the cemetery, recording the very poisonous Ivory Funnel, along with Wood Pinkgill and Ugly Milkcap. A cluster of Sulphur Tuft looked initially like the scarcer relative, Brick Tuft, but on closer examination the yellow stipes gave it away. Fairy Inkcaps, Flowery Blewitt, Bloody Brittlegill and False Chanterelle were seen before the smell of chips lured several members to Bowthorpe Road chippy. 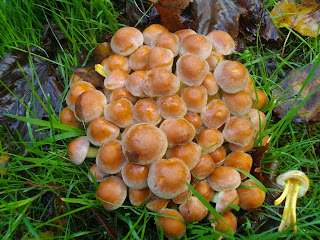 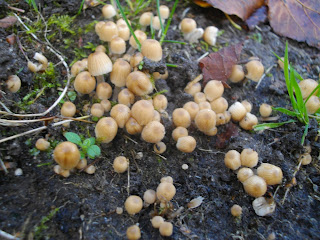 Re-energised with chips, we began moving back towards the main road, adding the attractive Saffron Milkcap and Bleeding Bonnet, which exude orange and red droplets respectively when cut. Back in the eastern half Anne found an Earthstar that caused some excitement because of the reddish colouration of the rays. Neil Mahler confirmed that it was a Rosy Earthstar, a new species for the cemetery and many of those present. Nearby a toothed yellow cup fungus, possibly Tarzetta catinus, was also of interest. 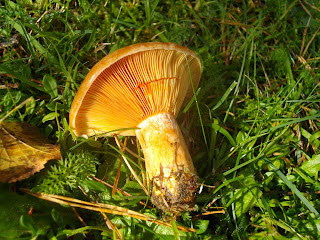 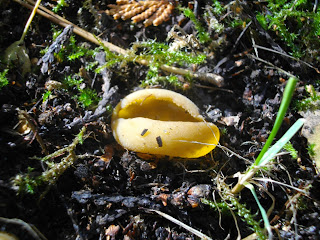 After briefly stopping to look at the Dog Stinkhorns, which were still going strong, we carried on to the waxcap areas. There was a good crop of Blackening Waxcaps, along with many yellow ones (either Butter or Golden), Snowy, Meadow and an unknown red one. Hairy Earthtongues and various spindles were also present nearby. The final species seen before we finally went home were two more earthstars, Striated Earthstar and Sessile Earthstar, growing near the crematorium. Around 70 species were identified in the field, with hopefully many more to come once some specimens are determined. 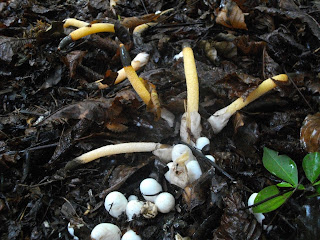 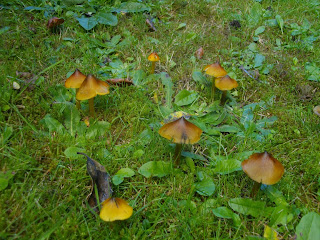 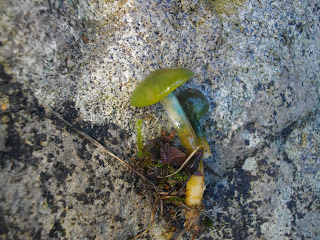 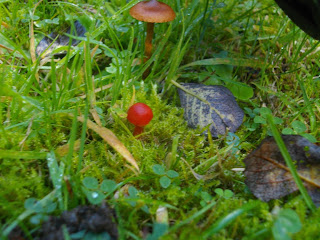 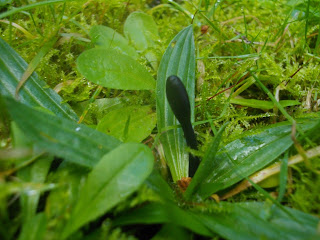 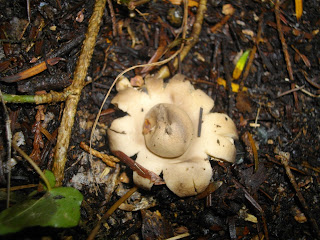 * Cemetery gates is a song by the Smiths from the album The Queen Is Dead - https://www.youtube.com/watch?v=IOMwu6OoGo4
Posted by James Emerson