Whitlingham - last visit of the year

Firstly I would like to thank everyone who took part in the Lesser White-fronted Goose poll. The poll attracted 22 votes (one of them mine). Views were polarised, with ten people believing the goose to have arrived from a foreign population and ten believing it to be an escape. Of the remaining two, one was mine (I'm reserving judgement to see whether it leaves with the Bean Geese or moves to a feral flock) and the other was content to wait for the BBRC to judge the occurrence.

So, back to actual birding. With Gary crocked, Adam & I decided to spend the day sliding around Whitlingham. The first birds of note were Greylags, a flock of 145 on the meadows alongside Whitlingham Lane. They were accompanied by the usual little hybrid goose. At least two of the birds had a domestic goose white "belly-band". This could allow them to be tracked later in the year, which will amuse me as I look at geese in the Yare Valley. The flock was the largest I can remember at Whitlingham, although it appears there was a flock of 260+ there last winter.

Walking along the edge of the Little Broad my second patch Coal Tit of the year was in the alders, as were a small number of Lesser Redpoll. With most of the Little Broad frozen, we moved on to the Great Broad, which also was mostly iced over. Scanning through the gulls Adam spotted a bright red leg, which turned out to be a ringed juvenile Herring Gull. The ring was on the left leg and had YZC in white lettering. The right leg had a more subtle metal ring. Preliminary research suggests that it was ringed at Landguard, so I have emailed them for confirmation. The first of two large holes in the ice was jam-packed with birds. I click counted 375 Coot and 125 Gadwall, whilst Adam saw a female Goldeneye which we failed to relocate. 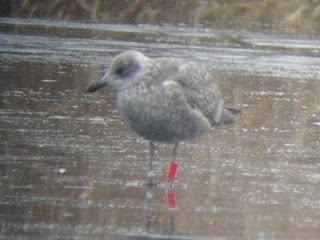 [Edit] I have heard back regarding the ringed gull pictured above. It was ringed as a pullus at Havergate Island, and has been reported twice in the autumn from Southwold. So now you know!

Following up on a report of a Nuthatch in the bit of woods near the carpark, we kept watch on the bird feeders. Around ten Long-tailed Tits surrounded a fat ball, and then hurrah, a Nuthatch! My target of 110 Whitlingham birds for the year was achieved, and a patch tick to boot. In the second ice hole a lone drake Teal and loads more Coot and Gadwall, taking the overall counts to 560 and 303 respectively. Further along on the ice were two Shovelers, and a Fox ran across the frozen east end of the broad. The woods held little of interest, although a few Redwing flew over.

Birds to try and find myself - Marsh Warbler, Icterine Warbler

Birds that realistically I'm not going to find, but would like to see: Blue-winged Teal, Bee-eater, White-winged Black Tern, Red-footed Falcon.

A big thank you to everyone who reads and/or contributes to my blog! I'd probably do it anyway, but it is nice to think that somebody out there reads it. Even bigger thanks to those I've spent time with in the field or have given me lifts etc, it is all much appreciated.
.
Merry Christmas, and a Happy New year to all! 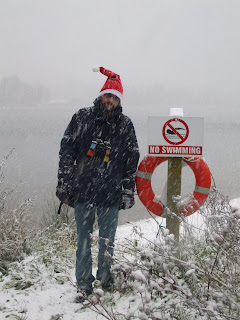 .
Ps. One more day left of the goose poll and it's a close-run thing, if you haven't cast your vote yet stop dithering and go for it ;-)
Posted by James Emerson No comments:

22nd December 2010
.
Adam had the day off work so we agreed to get the train to Cantley and have a look at the Lesser White-front. I may on occasion moan about the trains, so it is only fair to say that this one was running on time and was not affected by the temperature or snow. Taking the path down from Burnt House Lane we located the Bean Geese, but due to the lay of the land we couldn't see them all. Moving further round we got a better view, and eventually found the Lesser White-fronted Goose with a group of 90+ Bean Geese. There was also one White-fronted Goose with a smaller group of Bean, providing a pitfall for the unwary.
.
As well as admiring the snowy landscape, we continued scanning as we walked along the riverbank to Buckenham. We saw a ringtail Hen Harrier, two Peregrines and a Buzzard at the Cantley end, whilst a Barn Owl ghosted across the path nearer Buckenham. Large numbers of Wigeon were on the river, as was a Black Swan. At least four Chinese Water Deer were wandering in the snow. We checked out the new hide at Buckenham (it looks nice, but is there really a need for one here?), and saw two Dunlin flying over. In the woods at Strumpshaw we saw a couple of flocks of Redpoll fly over and had a chat with Ben, before walking on to Brundall where we got the train back to Norwich.
Posted by James Emerson No comments:

With the Wensum frozen over (for the first time since 1987 according to the EDP), I didn't hold out much hope for a productive day. I decided to have a look at Thorpe Station Marshes in the hope that a displaced Bittern may be lurking. Thorpe Broad was completely frozen, with 52 Lapwing, 24 Moorhen and a number of Black-headed and Common Gulls standing on it in discust. A mixed flock of Goldfinch and Siskins were in the alders along the railway line, whilst the bird of the day was Meadow Pipit, at least six trying to feed near the path across the grazing marshes. In a hole in the ice on the river a Little Grebe, 2 Tufted Ducks,6 Malland and 6 Mute Swans were keeping the cold at bay.
Posted by James Emerson No comments:

Local stuff and a Goose poll

18th December 2010
.
With more snow overnight I contented myself with a walk around the Golden Triangle, finding three Waxwings, a Fieldfare and three flyover Cormorants.
.
Looking on Birdguides as I listen to the Norwich match on the radio I see that the Lesser White-fronted Goose has been seen again today, but a caveat has been put on that there has been an escaped one at Buckenham since August. From what I understand, this is not the case. The bird that has been there since the summer was a hybrid, and not the bird that is with the Taigas. That certainly doesn't prove that the LWFG is wild, but it seems that people are going over the top in dismissing it. If I am wrong and there has been a feral pure Lesser White-front seen regularly at Buckenham this year then feel free to correct me. I would be interested in peoples views in general, so have set up a poll (on the right hand side). You have until Christmas Day, please vote for something or I'll be sad looking at a load of zeros at Christmas.
Posted by James Emerson 4 comments:

I sniffed and sneezed my way around Whitlingham on Saturday, still trying to see two more species to get me up to my years target of 110. There was a large number of Gadwall, a count of 800 according to the Broads Authority board. This was slightly surprising, as the board usually just has a generic "it's spring, look out for Swallows and spring flowers" type message on it. Maybe closing the Ranworth office means we'll get some proper conservation efforts. They may wish to start with building up the path to the bird screen, which is once again flooded. Other than the Gadwall, a drake Wigeon swam the length of the broad, a Water Rail squealed and one of the Red-crested Pochards was in the conservation area. I had a chat with another local birder who said that a couple of redhead Goosander have been on the river west of Norwich recently, might be worth a look if you patch around Sweetbriar. On the way back to Cathy's a small flock of Waxwings were near Lakenham Way before flying off towards Sainsbury's. 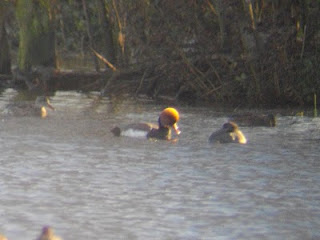 With snow still on the ground I had initially planned to stay in the city over the weekend, but a Hume's Warbler at Wells seemed to be worth a morning out. Having got the early train back to North Walsham, Gary drove us to Wells. There were only a couple of cars in the carpark when we arrived, so we set about searching the area around the toilet block. This proved more hazardous than you might expect, with large lumps of snow falling like missiles from the branches of the trees overhanging the path. We notched up flythrough Woodcock, Sparrowhawk and Barn Owl, but no sign of the Hume's. A thorough search of the undergrowth revealed a large number of Wrens, plus Goldcrests, Treecreepers etc. With more people now searching we went to check the redpoll flock, but only succeeded in seeing Mealys, whilst not too far away the trumpet of a Northern Bullfinch sounded. In the end the conclusion was that the Hume's Warbler had probably snuffed it, although what excuse the Arctic Redpoll had for leaving I don't know. As we went to leave a man with a voice as loud as Brian Blessed was returning from the beach with a shovel announcing that when he died he'd like to be buried in Wells Woods. "It's lovely here, isn't it?" his wife said. "YES. SUPERSONIC!". He replied. Strange times.
.
With a bit of time left until we had to be in Norwich, we stopped at the Dun Cow for a quick drink (only coffee, the ambient temperature was too cold for ale). We got a welcome pub tick as a Woodcock was flushed by a walker along the iron road, and a saw Snipe for the second time in a row here. Back in North Walsham, two Brambling were on Gary's feeders, and finally a small flock of Waxwing were in a tree near Anglia Square carpark. 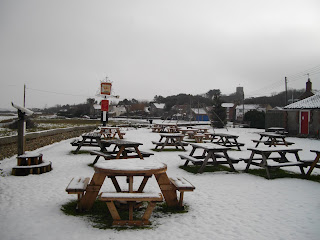 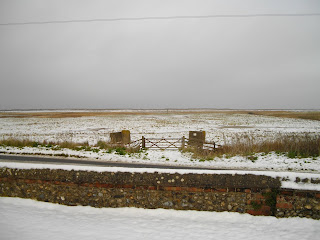 The view from the Dun Cow
Posted by James Emerson No comments:

Email ThisBlogThis!Share to TwitterShare to FacebookShare to Pinterest
Labels: Dun Cow, North Walsham, Pub, Wells
Newer Posts Older Posts Home
Subscribe to: Posts (Atom)
Hello and welcome to Birds & Beer, a Norfolk wildlife blog. I am a birder, naturalist and real ale drinker from Norwich, Norfolk. This blog documents my wildlife sightings, including regular updates from my local patch, Whitlingham CP.
Feel free to leave comments on any of the posts, and if you see any good birds at Whitlingham then by all means tip me off! I can be contacted by email on whitlinghambirds 'at' yahoo.co.uk
Happy birding.