I managed to to get to Northrepps for a quick look at the possible Italian Sparrow that was noticed a couple of weeks ago and is still present in the same garden. There has already been quite a bit of discussion about this bird with no real consensus - opinions are split between aberrant House Sparrow, Spanish Sparrow x House Sparrow or Italian Sparrow. For my part, I think that the largish bill, positioned high so that the forehead runs into it (rather than the visible forehead of House Sparrow) suggests at Spanish Sparrow involvement. Given the lack of streaking on the breast, I had wondered if it could be an F2 hybrid, but I suspect that this would show more grey on the crown, so my guess (and it is nothing more than that!) is that this bird is a Spanish x House Sparrow hybrid. This isn't perhaps as unlikely as it sounds - in 2009 at least ten Spanish Sparrows turned up in the Netherlands for example. Whatever the identity, I enjoyed watching the bird on a quiet and sunny day in the countryside, and as the keenest birders had already been, I had it to myself. As I walked back down Hungry Hill four Buzzards flew over and there were numerous Swallows and House Martins overhead.

Many thanks to Carl and Andy for flagging up this bird and allowing people to come and visit.

You can find visiting instructions and more photos of the sparrow here, and Dave Appleton has evaluated the possible identity of the bird here. 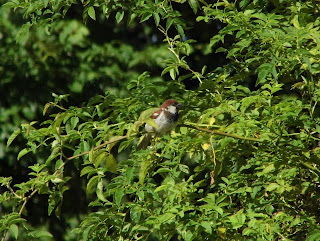 Whilst staying at the in-laws we put the moth trap out (until a torrential shower!). We caught large numbers of Willow Beauty and Scalloped Oak, but the best moth by a distance was my first Lesser-spotted Pinion. 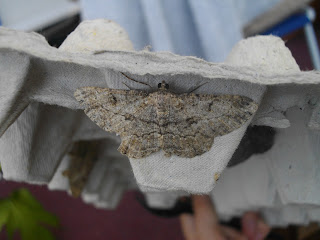 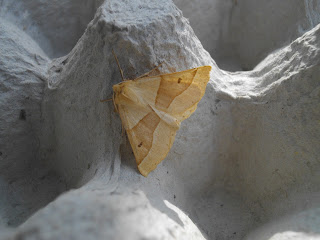 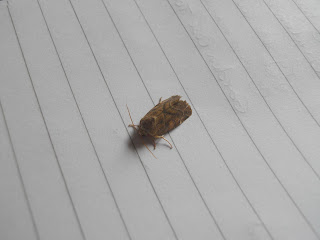 As the East Coast Truckers were assembling along the ring road on Sunday, I went down to Whitlingham on Saturday morning to get the WeBS count done. In drizzly conditions I counted 101 Mute Swans, 31 Egyptian Geese, 140 Mallards, 7 Great-crested Grebes and 6 Grey Herons, along with smaller numbers of the other common wildfowl. Across the river at Thorpe 28 Lapwing and one Common Sandpiper were on the shingle spit.

I took a quick detour into Whitlingham Woods to look at a bracket fungus that I had been told about, and on the way back saw these Suillus sp. ('Slippery Jacks'). 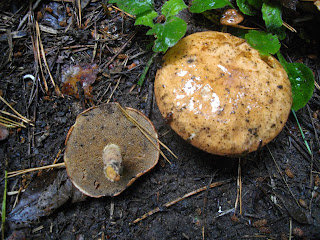 
Having been too busy to go Clouded Yellow hunting earlier in the month I was particularly keen to get to Thorpe Marsh where Ricky had just seen one on the marsh. Cathy & Margaret dropped me off and I joined Ricky trying to locate it, unfortunately with no joy. Small Tortoiseshells were everywhere, along with a number of dragonfly species (Ruddy Darter, Migrant Hawker, Southern Hawker, Brown Hawker) and Emerald Damselflies. A Swift briefly hawked insects over the marsh, and Lapwing numbers peaked at 26. I'm still hopeful of catching up with Clouded Yellow before the summer is out - I would appreciate details of any you may see in the Norwich area! 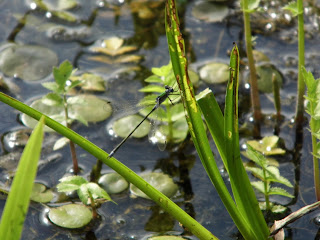 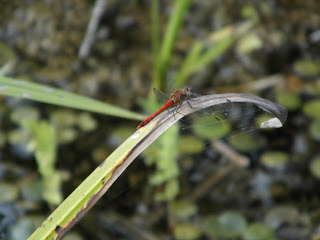 
I'm now back from the Lake District - if you are interested you can see some of the wildlife highlights over at Birds and Beer Extra, but in the meantime here is the highlight, a Scotch Argus butterfly seen at Arnside Knott. 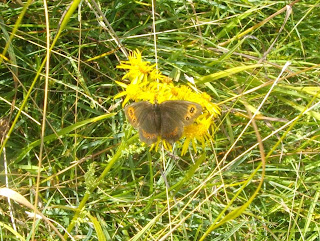 
I braved the summer crowds for an afternoon walk at Whitlingham. This year has seen something of an influx of Clouded Yellow butterflies, so I thought I'd have a look for a patch one. I didn't find any, but did manage 14 species, my highest single day count here. This included a Painted Lady and three Common Blues, which I have presumably seen here before and not noted. This became my 20th patch butterfly, with the only likely addition being Purple Hairstreak, of which I still think there must be some nearby. I also found a colony of Roesel's Bush Crickets, lots of Long-winged Coneheads and a Common Blue Damselfly with a non-goblet shaped marking.

On the bird front there are still at least four Common Terns on the Great Broad. Three large Great-crested Grebelings were on the river, still being fed by an adult, whilst across the river at Thorpe Tufted Ducks have bred for the first time in a while - a female and six young were on the shingle spit. 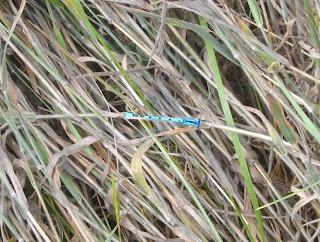 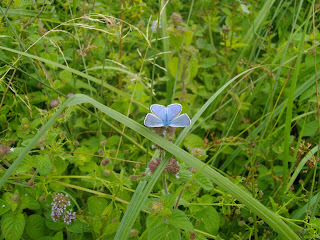 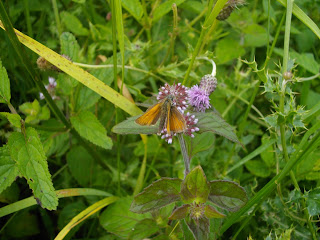 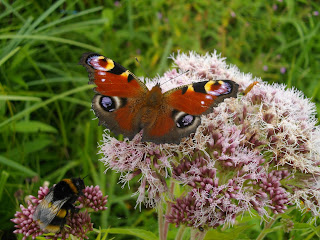 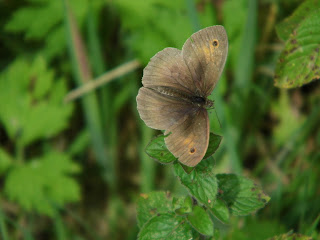 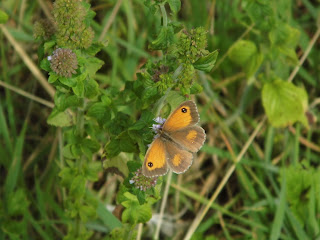 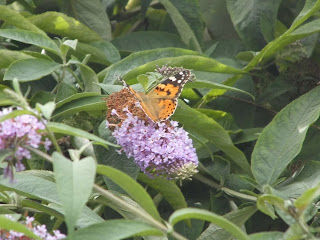 Time for our annual visit to Warham Camp, where despite the blustery conditions thousands of Chalkhill Blues were on the wing. Amongst the other butterflies were a few moths too, including a couple of Dusky Sallows. 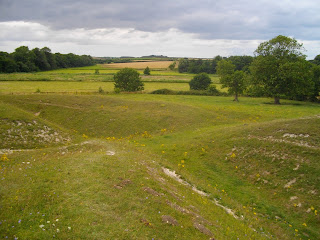 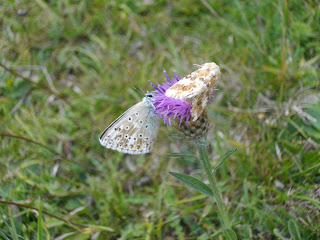 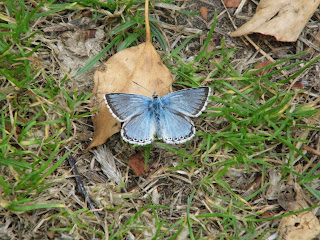 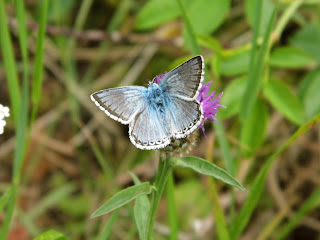 Email ThisBlogThis!Share to TwitterShare to FacebookShare to Pinterest
Labels: Butterflies, Moths, Norfolk
Newer Posts Older Posts Home
Subscribe to: Posts (Atom)
Hello and welcome to Birds & Beer, a Norfolk wildlife blog. I am a birder, naturalist and real ale drinker from Norwich, Norfolk. This blog documents my wildlife sightings, including regular updates from my local patch, Whitlingham CP.
Feel free to leave comments on any of the posts, and if you see any good birds at Whitlingham then by all means tip me off! I can be contacted by email on whitlinghambirds 'at' yahoo.co.uk
Happy birding.