This is a short guide to Whitlingham Country Park, aimed at helping first-time visitors to make the most of their birding at the site.

If you are interested, you can view the latest Whitlingham Bird Report via a link on the blog above the most recent post.  Feel free to email me for a copy if required or if you have any questions about the material contained in it.


Directions
Whitlingham C.P. is quite easy to reach by road.  Follow the inner ring road to the south-east of Norwich, and at the County Hall roundabout turn off towards Trowse.  After crossing the railway and river turn left at the village sign and just before St Andrews Church on your right.  This is Whitlingham Lane, and you drive along past the Canoe Club until you come to a renovated Barn and the main carpark.

Viewpoints
This route assumes you take an anti-clockwise route around the Great Broad, before taking a look along the edge of the Little Broad then back to the carpark. 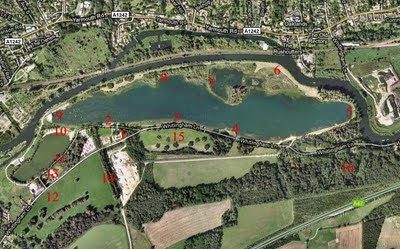 1.  The Carpark.  Of little interest in summer, but in winter there are feeders and a bird table alongside the small area of woodland along the edge of the carpark.  A range of common birds can be seen here, as well as Marsh Tits and occasionally Nuthatch.

2.  The Slipway.  The only shingle edge that the broad has, and on quiet evenings I have seen Grey Wagtail and Common Sandpiper along here.  On a more typical visit there will be a range of tame wildfowl, Mute Swans, Greylags etc, and usually some feral geese, including the Swan Goose hybrids.  The open area gives a good field of view to scan up and down the broad for wildfowl.  Pay particular attention to the far waters edge in winter for rarer grebes.

3.  Southern Broad edge.  Following the path you have Whitlingham Lane parallel to you.  It is lined with Alders, so keep an eye out for tit flocks and Siskins, although these are easier to see near the Little Broad.  Keep scanning the broad at regular intervals for diving ducks.

4.  Main island south shore.  When you are level with the island it is best to stop and scan along the shore.  The area to the north of the island is the conservation area bay, and is where much of the wildfowl congregates when the rest of the broad is being used by canoeists.  Cormorants and Grey Herons use the island, whilst Little Grebes and Teal favour the edges.

5. East end riverbank.  At the east end of the broad the path often floods and an alternative path has been made up onto the riverbank.  This is a better bet anyway, as it allows you to scan the quieter Thorpe Broad and marshes.  Wildfowl levels depend on how much disturbance there has been on the Great broad, but the main attraction is for waders.  Oystercatchers occur at anytime, but in spring look for Little Ringed Plover and Green Sandpiper.  As you make your way around the riverbank path you may hear Water Rails and Cetti's Warblers in the wet woodland.

6.  Conservation Area.  Keep to the path (and if you have a dog it needs to be kept on a lead) as you walk through the conservation area.  There is birch and reed along the broad, with bramble scrub along the riverbank.  Bullfinches can be found here, although they spend some time north of the river too.  In summer the area is good for warblers, with Garden Warbler and Lesser Whitethroat occasionally joining Sedge, Reed, Cetti's, Willow and Chiffchaffs.

7.  Bird screen.  A nice idea, but the low level of the path means that the bird screen is often under a couple of inches of water.  From it you can see across the bay, although depending on the light you may get a better view from the main path.  The bay is where most of the wildfowl goes, and is the best area to pick out birds from the flocks.  In winter scan the edges of the smaller island for Snipe.

9.  The Watersports centre.  A busy area, but it can still be productive.  Nearby you can look down the length of the broad, and newly arrived flocks of hirundines often perch on the fences and outbuildings.

10.  Little Broad beach.  Originally touted as a tourist beach for Norwich, but after an incident where a child swam out beyond the signed bathing area the beach was turfed over and the broad fenced in.  Most of the Little Broad is lined by trees, but with a telescope you can view almost all of the broad from the end.  The beach used to host Grey Wagtails in the evenings and often a Black Swan can be found here with an adopted Mute Swan family.

11.  Little Broad Alders.  The alders along the south edge of the Little Broad are the best place to look for Siskin, which occur regularly in winter.  Redpoll also occur, typically in late January into February.  If the area hasn't been disturbed then Water Rail and Kingfisher can also be seen here.

12.  Whitlingham Meadows.  The field opposite the country park is sometimes used to graze cattle, and usually has Pheasants, Egyptian Geese and Mistle Thrushes.  The trees at the back hold Jackdaws, and sometimes Buzzards are seen being mobbed by them.  Now and again a Red-legged Partridge or two finds their way into the meadows.

13.  Little Broad scrub.  The scrub along the Little Broad can be seen better from the roadside path than the Little Broad path in places.  The scrub turns up the usual warblers and hedgerow birds, but is worth scanning for something more unusual.  Part of this area has been cleared to provide space for an Archery range.

14.  Lime Tree Avenue.  The avenue of trees runs from the ruins of Trowse Newton Hall near the Great Broad, across Whitlingham Lane and along a permissive path that runs through some farmland, past Whitlingham Hall (used as a hospital during the second world war if memory serves).  If you follow the path you can either come out at the top of Trowse village or walk down through Trowse Woods.

Other areas nearby
15.  Whitlingham Picnic Meadows.
A grassy area screened from Whitlingham Lane by a row of Alders.  Good for picnics, less impressive for birds.

16.  Whitlingham Woods.
Whitlingham Woods has its own carpark further down Whitlingham Lane if you don't fancy walking.  It is mixed coniferous and deciduous woodland, and much effort has been made recently to put in bark-chipping paths.  In winter roaming tit flocks and Goldcrests can be found, and owl boxes have been put up in the hope of tempting Tawny Owls to breed (although they may already do so!).

17.  Whitlingham Marsh.
The last part of Whitlingham Lane open to traffic has space for two or three cars at Whitlingham Marsh, just before the road goes under the A47.  There is a circular walk with a bird screen overlooking a small pool.  It used to be a hide, but it used to have a bad reputation for certain activities, which have presumably now ceased.  Several scrapes have been created to attract waders, but I'm still yet to see any.  You may see a Kingfisher or Grey Heron, but the only good bird I've seen at Whitlingham Marsh in the last five years is one Stonechat.  Let me know if you have better luck!

18. Whitlingham Sewage Works.
Obviously the sewage works are private, and they are even protected with "Smart water" in case you see something you like.  You can see into part of the sewage works from Whitlingham Lane, which may give you Oystercatcher and Rook, but again I'm yet to see anything great here.

19.  Trowse  Meadows
Trowse has two commons, one is a small grassy rectangle near the church (accessable from the playground field), but the better one is the one that runs between Whitlingham Lane and the river.  A Kingfisher is resident although you're only likely to see it early morning or in the evenings.  The scrub attracts a good range of small birds, and you can see onto wasteland the other side of the river, which if there was any justice would hold Black Redstarts.  Its worth looking down the river for Sandpipers at migration times.

Email ThisBlogThis!Share to TwitterShare to FacebookShare to Pinterest
Home
Subscribe to: Posts (Atom)
Hello and welcome to Birds & Beer, a Norfolk wildlife blog. I am a birder, naturalist and real ale drinker from Norwich, Norfolk. This blog documents my wildlife sightings, including regular updates from my local patch, Whitlingham CP.
Feel free to leave comments on any of the posts, and if you see any good birds at Whitlingham then by all means tip me off! I can be contacted by email on whitlinghambirds 'at' yahoo.co.uk
Happy birding.