Continuing the theme of Norwich-based excursions, Cathy, Rose and I went to Earlham Cemetery to take part in the Friends of Earlham Cemetery event for BSBI's New Year Plant Hunt. There seemed to be fewer plants in flower than recent times, but I think the final total didn't necessarily back up that observation. We got a brief glimpse of a Muntjac, which pleased Rose (although not as much as the cat that accompanied us around a section of the cemetery).

Highlights of the visit were probably non-floral - we saw some good specimens of Striated Earthstar, before being shown some Lacquered Bracket (Ganoderma lucidum) and the eggs of a Vapourer Moth, laid on the cocoon that the female would have originally emerged from (the females are wingless in this species). 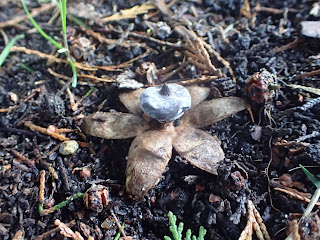 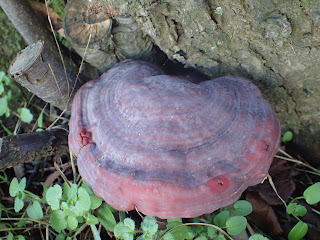 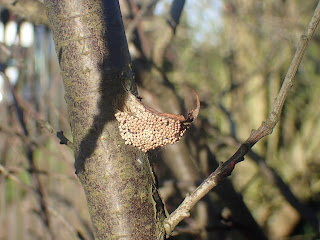 Having left the cemetery and gone shopping, I had a call from Gary White to say that he had found a Waxwing showing well on Edinburgh Road. I took a rather winding way home to look for it, intitially with no success, before hearing it call nearby. A look down the next road along and hey presto, a Waxwing perched up on a TV aerial on College Road. It didn't stay long, flying back towards the original location, but always nice to see this species around the city.
Posted by James Emerson No comments:

Having a couple of hours free, I headed up to Mousehold Heath and then walked across to St James' Hill, where you can get a fine view out across the city. I then carried on to visit a new site for me, Ketts Heights. This place, so-called because it was the meeting place for Robert Kett and his men in the 1749 attempt to take the city, is something of a hidden gem, with access through some unassuming gates off a busy road. I took some lunch up and had a very peaceful time, looking out over the cathedral. The view is arguably as good as that from St James' Hill, but it is more restricted by trees either side. 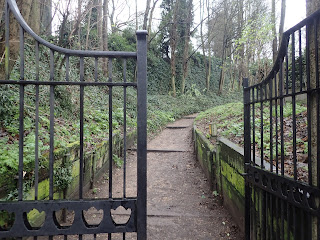 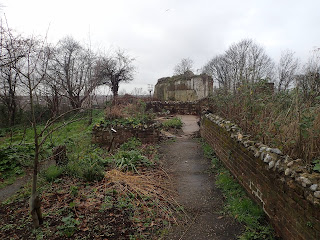 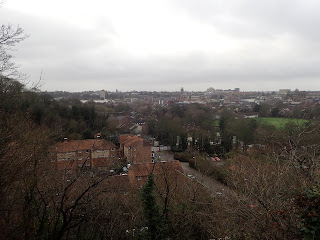 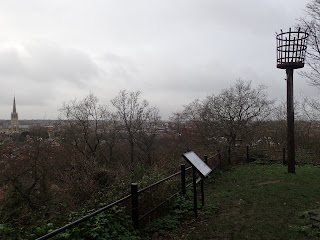 Our Whitlingham trip on the first had come at a slight cost, with a nail in the tire. Unfortunately I didn't realise straight away and the tire was unrepairable, but fortunately when I did discover it I was at my in-laws nearby, as I didn't have a torch with me so changing it would have been tricky. Anyway, that meant that the next day was spent taking the car in to have a new tire fitted. Whilst I waited I went for a walk in Train Wood, adding a handful of extra birds to the previous day's total. A Coal Tit called from a conifer near the entrance, whilst a Long-tailed Tit flock roamed the wood. Having not seen Egyptian Geese at Whitlingham I noted a pair across the river at Wensum Park. I made a note of some plants in flower and some fungi, including a couple of small Scarlet Elf Cups. 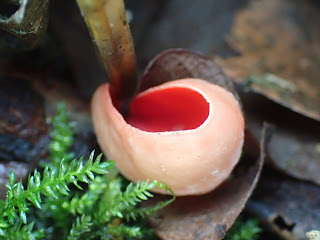 Next along the path was Anderson's Meadow, and whilst recording Phytomyza chaerophylli, a common winter leaf miner in Cow Parsley, I noted some mines in Goosegrass. I had hoped it would be identifiable from the mine, but Barry Warrington advised me that it was likely to be an Aulagromyza but ideally wanted to be bred through for a firm ID. 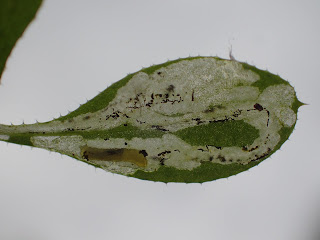 It was a similar story further along at Sweetbriar. I spot checked a few ivy-covered trees in the hope of finding a small green spider that Vanna has found here recently, but was distracted by some leaf mines in Pendulous Sedge. They struck me as similar to the ones that I saw at Whitwell recently, that had been parasitised before pupation. At least one here did contain a puparium, which I photographed and hope that will be identified in due course. I then took walked across and joined the Marriott's Way path for a slow walk back home. 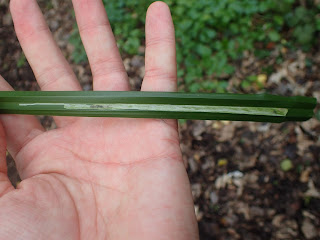 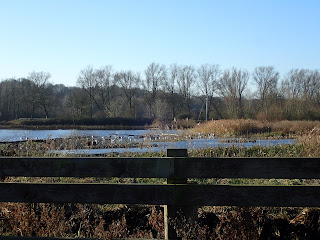 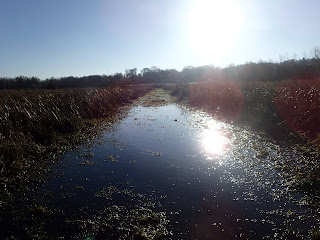 Happy New Year everyone. Are you missing 2019 yet? Well why not look back on the previous year at Whitlingham and Thorpe using this handy bird report? 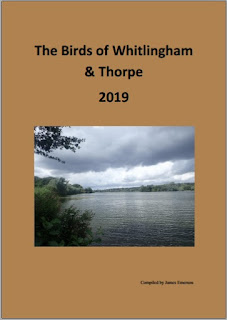