On my way into work on Tuesday morning I heard some wild swans calling, and looking up saw a flock of around 40 Bewick's Swans flying over. A very pelasing start to the day, although a shame that I wasn't at Whitlingham where they would probably have been visible and a patch tick!
Posted by James Emerson No comments:

Before heading to Sheringham on the previous day I had received a phone call from Gary to tell me that he had found a Ring-necked Parakeet along the Marriott’s Way to the west of Norwich. Ring-necked Parakeets have been slowly spreading from southern England, and have bred as close as Cambridgeshire in recent years. There are a few records in Norfolk each year, most probably wandering birds from established urban populations, although some may be escapes. This bird is presumably the same individual seen in west Norwich in the autumn (and possibly the same bird seen in Surlingham before that).

Having not seen Ring-necked Parakeet in Norfolk, I initially set off for Low Road, to look around trees in the area that Gary had seen the bird head for. With no luck here I carried on to the parking area for Drayton Green Lanes, where I did a lap of this small reserve, hearing a Water Rail but not seeing much. I decided the best course of action would be to go round to Hellesdon Mill and walk along the Marriott’s Way in the hope of seeing the Parakeet from there.

After quite a long walk I had rather given up hope, and turned round to come back. I had reached an area near one of the railway sculptures when I heard a Ring-necked Parakeet calling in the distance. Despite not having seen one in Norfolk I have heard them quite a few times in London and Kent, so was confident it must be there somewhere, and indeed it was. I initially saw the Ring-necked Parakeet in flight, but then managed to track it as it landed in some tall trees. It called almost constantly until a Buzzard flew over. After a while I left to continue my walk home, only to find that it had flown closer, albeit with worse visibility as it had landed in an area of scrubby woodland.

On my way back I cut through Gunton Recreation Ground, noting Scarlet Elf Cup, Blushing Bracket and Alder Bracket. Other birds seen on my walk included Redwings, Green Woodpecker and Great-spotted Woodpecker. 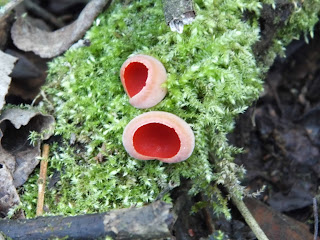 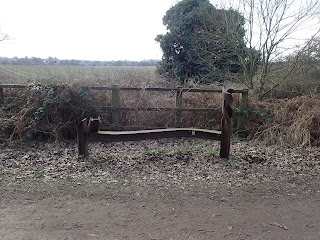 On Saturday it was back to Sheringham, not for wildlife this time but to watch a re-enactment of a Viking Boat burning, which was very enjoyable. 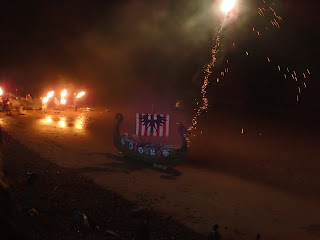 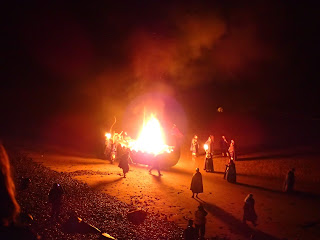 After my Ringland visit I headed to Whitlingham Woods for a quick walk around before picking Cathy up from the city. Whilst there I noticed some Spurge Laurel, a plant I’ve not recorded here before. Further along I went to check a fern (I’m still looking for Borrer’s Scaly Male Fern here, which was recorded on a vegetation survey years ago) and was surprised to discover it was Soft Shield Fern, only the second time I have seen this species. I just had time to check some Box bushes, finding one of the same galls seen at Catton Park, before heading back. 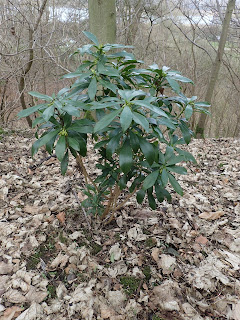 Email ThisBlogThis!Share to TwitterShare to FacebookShare to Pinterest
Labels: Ferns, Whitlingham
Newer Posts Older Posts Home
Subscribe to: Posts (Atom)
Hello and welcome to Birds & Beer, a Norfolk wildlife blog. I am a birder, naturalist and real ale drinker from Norwich, Norfolk. This blog documents my wildlife sightings, including regular updates from my local patch, Whitlingham CP.
Feel free to leave comments on any of the posts, and if you see any good birds at Whitlingham then by all means tip me off! I can be contacted by email on whitlinghambirds 'at' yahoo.co.uk
Happy birding.