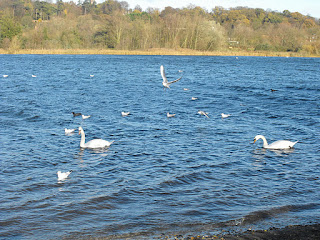 Looking over at Thorpe Broad the river looked particularly high, and I later found out that there had been some localised flooding at the coast. The conservation area bay was packed with birds for a change, but still nothing scarce (2 Little Grebes, 5 female Pochard and some Teal the best birds). The Little Broad looked like it hadn't been disturbed that morning, with more Tufted Ducks and Gadwall, and a couple of Shoveler for good measure. 12 Siskins were also bombing about the site.
Posted by James Emerson No comments:

20th November 2011
A couple of people had sent me messages during the week suggesting that I should go and see a Hume's Warbler in the middle of Lowestoft. Phrases like "great views" and "you can't miss it" were dangerously bandied about. As it happened Norwich was completely enveloped by fog, so a trip out seemed a good idea, even if it was to Suffolk. Cathy located the alley where the bird had been, which quite frankly looked more likely to host a body than a rare bird. A couple with binoculars confirmed we were in the right place, but the only bird there today was one Blue Tit. Bugger. Luckily all was not lost. Lowestoft is so good for birds, if one leaves, there is always another one just up the high street. So it proved here, and I finally did see a Hume's Warbler, albeit a bit further away than the first bird would have been, feeding merrily in trees behind the Royal Falcon. Why don't we get birds like this in Yarmouth I wondered, oblivious to the fact one had been found in Yarmouth that morning. Having run out of 'foot-in-mouth' moments, we went home.
Posted by James Emerson No comments: 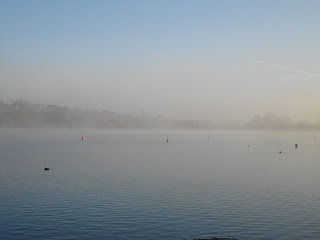 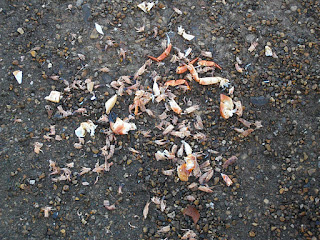 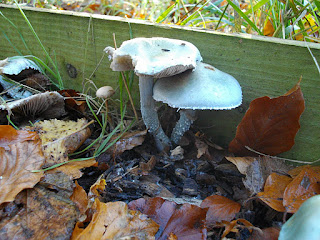 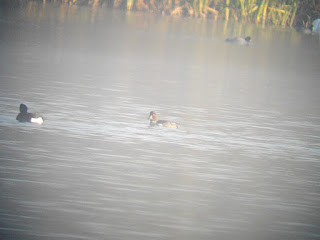 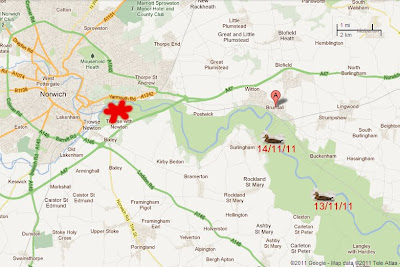 WHITLINGHAM: A few more ducks and a Goldeneye

12th November 2011
Illness had prevented me from going out last weekend, so I was particularly keen to get to Whitlingham early on and see what wildfowl had arrived. November is one of the best times to find scarce ducks at the C.P, with Ring-necked Duck, Pintail and Red-crested Pochard in previous years. None of those species were present today (ironically its the Pintail I was hoping for most), but there was a range of the expected winter ducks in small numbers - 1 Goldeneye, 2 Shovelers, 5 Pochard, 16 Wigeon and 30+ Teal. A couple of Little Grebes were bobbing around near the Cormorant posts.
Many birds were flying overhead, I noted Redwings, Skylarks and a Lesser Redpoll, but I'm probably missing out on some ticks by not knowing more flight calls. Is there a CD of flight calls made anywhere, or is this going to be a bird-by-bird Xeno Canto job? I didn't see the Siskin flock that was around a couple of weeks ago, but it was quite mobile. Near the Little Broad was a dead Coot. I checked it in case it was ringed (it wasn't) then left it. I sort of felt that I should move the body into the undergrowth or something, but as I couldn't decided why that would be of any benefit I decided against it.
Posted by James Emerson No comments:

Email ThisBlogThis!Share to TwitterShare to FacebookShare to Pinterest
Labels: Norfolk, Whitlingham
Newer Posts Older Posts Home
Subscribe to: Posts (Atom)
Hello and welcome to Birds & Beer, a Norfolk wildlife blog. I am a birder, naturalist and real ale drinker from Norwich, Norfolk. This blog documents my wildlife sightings, including regular updates from my local patch, Whitlingham CP.
Feel free to leave comments on any of the posts, and if you see any good birds at Whitlingham then by all means tip me off! I can be contacted by email on whitlinghambirds 'at' yahoo.co.uk
Happy birding.