My garden is close to a cemetery, and as such I get a decent variety of birds. However there are some notable absentees, including Greenficnes and Goldfinches. Everyone I know who has put up a niger* seed feeders has them by the bucketload. I have seen a flock of up to 40 in a tree in the cemetery, but they just aren't interested in the niger, sunflower seeds or millet. Anyway, whilst listening to the cricket this afternoon I was watching a Coal Tit and a Nuthatch in the small tree in the garden when I noticed a bird on the niger feeder. A male Siskin! Joined soon after by a female, which alternated between the sunflower seeds and the niger. I see Siskins almost every time I go birding over the winter, but there really is nothing like seeing them in your own back garden.

* niger, nijer, nyger, nyjer. Take your pick, its the little black seeds that Goldfinches eat in other peoples gardens.
Posted by James Emerson No comments:

27th February 2011
.
I did consider going to look for the Marlingford Great White Egret, but its a few miles too far from Norwich to be a comfortable walk. Instead I didn't check BirdGuides on Sunday morning and went to Lakenham Mill to check the nearest stretch of the Yare in case it had moved east along the river. Alas it hadn't, but it was a much nicer walk to Whitlingham than following the ring road, and I did see a Grey Wagtail and hear my second Cetti's Warbler of the year.
.
Looking at the Little Broad it appears that someone in their infinte wisdom has decided to fence off the flagship "beach" from the water, presumably as a reaction to people not swimming within the designated areas only. A sad state of affairs.
. 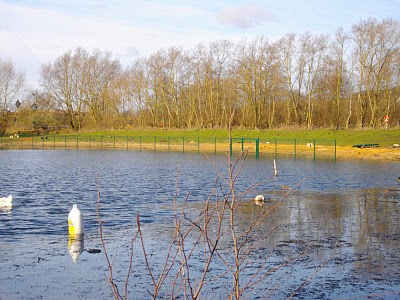 .
I've given up on seeing Bramblings beneath the feeders, but did stop for a while to watch the rats (now numbering at least seven) which happily scamper around eating the seed. I had a nice chat with another onlooker, who was clearly older than she looked, as she said that whenever she sees rats they remind her of the plague. There was even fewer waterbirds on the broad than last week, only the c50 Teal being a decent number. Again I added a single bird to this years patch list, with a singing male Reed Bunting returning to the same bush for at least the third year running
Posted by James Emerson 1 comment:

23rd February 2011
.
Taking advantage of the sunny weather Cathy & I went for a walk in Rosary Cemetery. We saw the expected selection of common woodland birds, but the main attraction at this time of year is the crocuses that carpet large areas. Add in the Snowdrops, Aconites and first Primroses of the year and its got to be one of the nicest areas to spend some time near the city. The warm weather had brought large numbers of 7-spot Ladybirds out, mostly in the ivy.
. 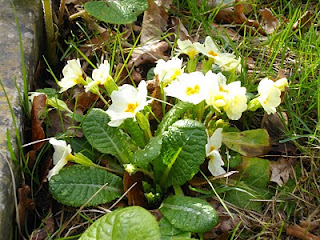 .
Afterwards we had a quick walk around Carey's Meadow. Most of the vegetation has been cut back to allow new growth, but we did get good views of a Green Woodpecker under one of the small trees. On the way back we intended to have a drink at the Mustard Pot, but it only opens at 4pm! What is the world coming to?
Posted by James Emerson No comments:

21st February 2011
.
Before Christmas I had agreed to give one of my non-birding friends a guided walk of Titchwell. On the way we stopped to watch a Barn Owl sat on a roadside post just past Docking, and after arriving we saw a second one hunting over the marshes west of the main path. A large flock of Siskins were in the alders by the feeders, along with a carpet of Chaffinches below them. The water level seemed a bit high, but we saw the expected waders (Avocet, Golden Plover, Ruff etc) and my first Pintail of the year.
.
It was my first look at the new Parrinder hide, and it was a mixed reception. The large windows and even floor are a plus, but I didn't even attempt to use the window-opening mechanism. I was puzzled by the use of a connecting door in the lower section, dividing the hide into two parts. That could be rather annoying when the hide is packed and a bird moves along the freshmarsh. I also have to wonder whether more money than was necessary was spent on the "futuristic" design to make the building conform to some aesthetic ideal, or whether there is a good reason for it. Still, its new and its not broken yet, and with those individual seats you can reasonably tell people talking cr*p to "go swivel", so its not all bad.
.
In a quick scan of the sea I saw the Common Scoter flock, Red-breasted Mergansers, Goldeneye and a Long-tailed Duck, whilst a Sanderling running along in front of us kept Cathy & Emma entertained. On our way back we picked up the Twite flock and some Reed Buntings, and a quick stop at Choseley revealed a few Yellowhammers. After lunch we went home, the first time this year that I've gone birding out of Norwich and someone hasn't been or ended up on crutches! 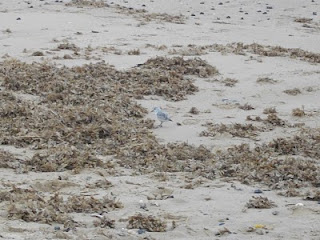 Email ThisBlogThis!Share to TwitterShare to FacebookShare to Pinterest
Labels: Titchwell

WHITLINGHAM: Miss of the month

I've just found out that a drake Baikal Teal was seen at Whitlingham at the end of January! The chances of it being of wild origin are somewhere between nil and zero, but it would have been a cracker to see. As it happens I was at Whitlingham the morning after it was seen, so I can at least be content that I would have seen it had it stayed around.
.
On a more serious note, first the Red-breasted Goose, now Baikal Teal (not to mention the Red-crested Pochard and Mandarin of unknown origin last year) - is someone nearby forgetting to lock the pen doors?!
Posted by James Emerson 2 comments:

20th February 2011
.
Today's visit was dedicated to doing a wildfowl count of the Little Broad, Great Broad and Thorpe Broad. For the first hour or so the country park was as quiet as I've seen it in ages, possibly due in part to the discovery of a body late last week putting people off. Later it did get busier, with a group of joggers and some scuba divers. I won't bore you with the counts, but 400+ Black-headed Gulls and 52 Teal were noteworthy. I did add one bird to the year list, an overdue Snipe.
Posted by James Emerson No comments:

WHITLINGHAM: Week 7 - Black Swan (no, not the weird ballet film)

Trowse Meadows were short on birds, but some territorial Egyptian Geese stopped it from being quiet. A Marsh Tit was in the hedge along Whitlingham Lane. At the country park there was a notable increase in bird song from the previous week, and there has been a noticeable clearout of Gadwall and Coot from both broads. The area around the slipway had been chained off by the Norwich Yacht Club. This group of eccentric individuals used to walk along the bank of the broad every so often racing their model boats, but now appear to have become more organised. Presumably its a once-a-month job, but it does seem to set a precedent for allowing groups to close bits off, which is rather annoying bearing in mind that the North shore of the Little Broad is now private and the Great Broad is often disturbed by watersports. Maybe I can have one day a month to set up a watchtower and shoot dogs that are being allowed to attack swans. 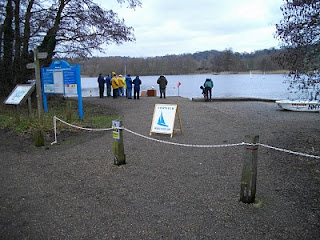 I had presumed that the missing Gadwall and Coot would be in the conservation area bay, but it seems they have just gone. A few Teal, Pochard and Shoveler remained, and there was a raft of loafing gulls, 150+ Black-headed and c20 Common. It started to drizzle, and the day was only redeemed in part by the re-appearance of the Black Swan. 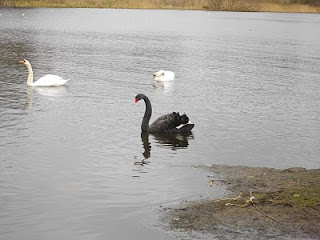 5th February 2011
.
Blimey it's February already, surely only a matter of time until a good bird turns up locally? Trowse Common was shaping up to be a disappointment until a Kingfisher shot along the ditch between the common and Whitlingham Lane. Finally a first glimpse of the year of my favourite bird. The Little Broad Alders were quiet, but I found myself surrounded by Siskins further along near the ruins of Trowse Newton Hall. Within the flock was a Treecreeper, a Lesser Redpoll and another redpoll, which flew off before I could clinch it. I had a quick chat with Dave Appleton, who was on the lookout for a hybrid duck, before setting off around the Great Broad.
.
There's no point bulking out the rest of the post - it was windy, two brown-head Goldeneye were in the conservation area bay. Otherwise it's as you were at Whitlingham.
Posted by James Emerson No comments:

Email ThisBlogThis!Share to TwitterShare to FacebookShare to Pinterest
Labels: Whitlingham
Newer Posts Older Posts Home
Subscribe to: Posts (Atom)
Hello and welcome to Birds & Beer, a Norfolk wildlife blog. I am a birder, naturalist and real ale drinker from Norwich, Norfolk. This blog documents my wildlife sightings, including regular updates from my local patch, Whitlingham CP.
Feel free to leave comments on any of the posts, and if you see any good birds at Whitlingham then by all means tip me off! I can be contacted by email on whitlinghambirds 'at' yahoo.co.uk
Happy birding.