30th May 2009
Following a frustratingly birdless week (although I did go and see all 50 hippo sculptures in North Walsham, so it wasn't all bad), news broke Friday night of a Short-toed Lark on Blakeney and a Great Knot at Breydon. It was on the cusp of us being able to get the train to Yarmouth, so we decided to go early Saturday instead. Whoops. Having not seen the bird I cannot comment on it's identification, however I am going to make two points:
1) On Saturday morning there were at least 5 (Red) Knot. As can be the case at large twitches, people arriving later can often find or be put on to the wrong bird, and it is quite possible that the original bird seen well by local observers was a Great Knot, whilst the bird seen distantly and photographed later was a Red Knot.
2) The individual that reported the Great Knot as "very distant" at 21:55, that's got to be a joke right? Picking out a potentially tricky wader, distantly, at Breydon, in almost pitch black? And being certain it wasn't a Red Knot, or a stone, or a streetlight, or a star? Hmm.
Oh, and I know it's my fault for reading so many blogs, but please, no more knot jokes, seriously, no.
Anyway, having got used to dipping whatever I try and twitch, we decided to try the old fashioned find your own route. Yarmouth cemetery unfortunately failed to deliver any migrants or even a SpotFly. It does appear that the squirrels or yarkos have taken to pushing gravestones over for fun, which was a shame.
Making the most of our all day train tickets we stopped at Brundall on the way back and walked to Strumpshaw. No sign of the Swallowtails that had been flying that morning (the suggestion being they like it warm, but rest when it's too hot) but a few interesting plants in flower, such as Marsh Cinquefoil and Marsh Pea. My first Banded Demoiselle and Black-tailed Skimmers were also on the wing. The tower hide produced lone Pochard, Shelduck and Tufted Duck, and with a bit of patience a Hobby skimming over the reeds. The meadow trail was open, but with literally one orchid flower spike, I'd give it a few weeks.
Having a 45 minute wait for a train we popped over to the Yare pub in Brundall for a pint of Wherry before arriving back in Norwich to watch the FA Cup final. 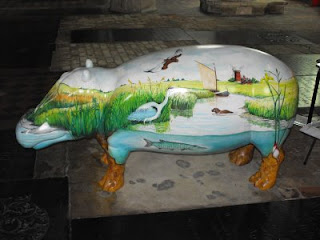 The artistry is great, but the coypu is rather outdated! Also, on the reverse side below a Swallowtail is a Wigeon. Maybe I shouldn't be so fussy. 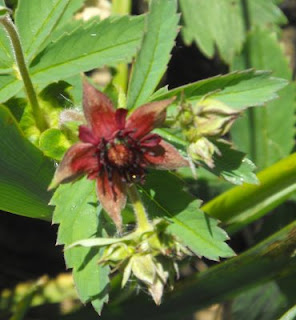