I know, everyone liked the Swallowtail picture, but it's just not a bird is it? I don't really talk about beer that much either (I have AA meetings for that). Luckily on my way to a music fair in the city I bumped into this partially-leucistic blackbird. I had been told by another local birder that there was one in Chapelfield Park, but I hadn't seen it on my daily walks through. The bird was initially feeding near Vauxhall Road until pedestrians flushed it, and further investigation showed it was feeding a fairly well-grown juvenile near Pedros restaurant. The juvenile bird showed normal plumage as I would expect (presumable leucism is a recessive trait), but that got me thinking whether juvenile plumages show albinism/leucism or not? Opinions welcome.
. 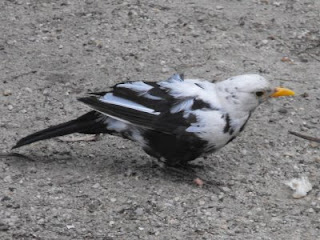