27th October 2009
.
After a complaint from Cathy that I wasn't finding her enough birds, we went to Cley to look for Snow Buntings. A compromise look through the waders failed to turn up the White-rumped Sandpiper, but there was a nice looking white-headed Ruff. We sat in Dauke's Hide scanning the Teal and Wigeon, and eventually found the Green-winged Teal sleeping on an island. A slightly surreal moment happened earlier when a woman who followed us into the hide asked us straight away where it was, and when I replied "I don't know, I've only just got here" muttered "you mustn't be able to see it from here, there's not enough people" and walked out. Notwithstanding the old way of doing things (i.e. looking for yourself), it seemed an odd principle that a bird is only present if a crowd is watching it. Very odd actually.
. 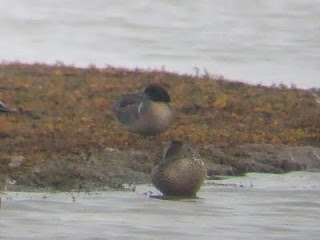 .
A few Bearded Tits flew over, and flocks of 30-50 Redwing and Fieldfare were flying over regularly. We heard a Water Rail, but didn't see it, much to Cathy's dismay, and unsurprisingly the Snow Buntings had gone. A seawatch was poor, however in addition to a lone adult Gannet going east, a Great Northern Diver sat offshore. We walked along to Salthouse, then back to the village. A flock of around 200 Greylags was on Arnold's Marsh, and a (tame) Snow Goose and at least 4 Canada x Greylag Geese joined a Canada Goose flock. A Barn Owl hunting over the marshes was a nice end to the day.
Posted by James Emerson