Finally I am settled into the new house, albeit with no sofa and lots of boxes of tat that I refuse to throw away strewn around the place. My garden almost backs onto Earlham Cemetery, so I am hopeful of some good garden ticks come the winter. So far I've had Coal Tit and Long-tailed Tit on my new feeders, and a pair of Sparrowhawks have flown over. I haven't found much info about birds in the cemetery other than a lone report of a Firecrest a few years ago, so if anyone has seen anything of note (yellow-browed warbler maybe?) in there I would be interested to hear about it.

In between waiting in for appliances to be delivered I have been out a few times, firstly to have a look at the Lesser Grey Shrike. Unfortunately it was Cromer carnival week, which added some time to the journey (as did the homicidal Romanian at Salhouse who tried to de-rail the train by putting concrete blocks on the track). At least at Sheringham I got to watch some of the Red Arrows flypast whilst waiting for the bus. 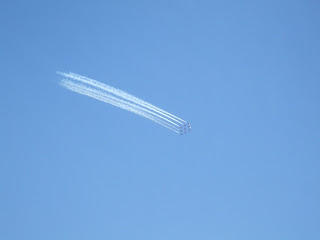 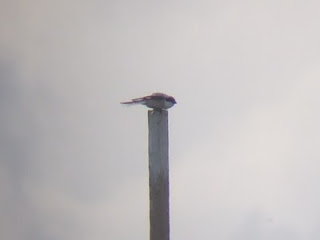 The Lesser Grey Shrike ducks to avoid the Swallows that were mobbing it. A rubbish digiscoped shot, but it shows the breast contrast nicely.

I also canoed down the River Bure between Skeyton and Coltishall. A pleasant stretch of river, but only one Kingfisher to show for it. 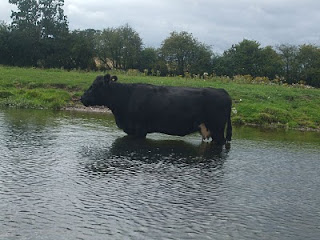 A whole field to graze in, but no, it wanted to be in the river.

After several years of thinking I should go, me & Cathy finally went to Warham Camp to see the Chalkhill Blue butterflies. If anyone from the council is reading this, an important historical site is probably worthy of some sort of sign directing you towards it. The butterflies are at the end of the flight period and rather tatty, but it was a nice place to spend the afternoon. 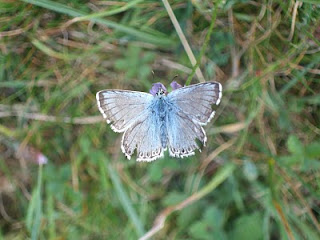 Overnight rain has meant that we hadn't put the moth trap out for a while, but of the few that came to the outside light there is only one record of Orange Swift on the Norfolk Moths website this year, making it of particular interest. 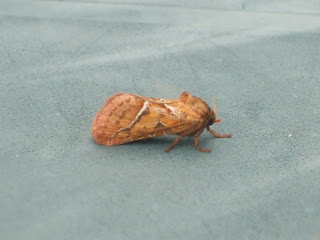