With heavy rain forecast for much of the weekend, I decided to get the wildfowl count at Whitlingham done on Saturday in case Sunday was a washout.With my inland patcher's hat on I was at least hopeful that there may be a sea-bird of some description around (several sites in other counties managed Great Skuas and Leach's Petrels). As it was the weather was actually rather pleasant, and there was nothing out of the ordinary at all on the broad. Some small flocks of Redwings were flying over as they have been for the past few days, and a Redpoll sp. also flew over calling. Across the river at Thorpe at least six Snipe were on the spit, probably a fraction of the actual number there.


In terms of other wildlife there were some Shaggy Ink Caps and Sulphur Tuft, and I managed to photograph a Migrant Hawker resting in the vegetation at the edge of the broad. 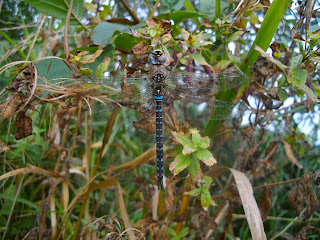 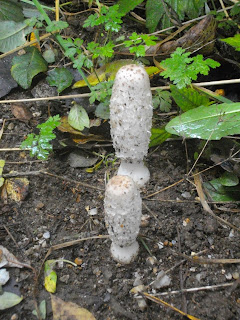