I took advantage of being on the late night shift by catching the bus to Dussindale. There was still fog hanging around, which didn't look promising, and a first walk around produced nothing more interesting than two sparring Blackbirds. On the way back I saw four birds fly across the road and thought "Waxwing"! I then saw more flying off a TV aerial and cursed "Starling", before getting close enough to see through the fog, a flock of 22 Waxwings sitting by the road! I took a few photos from a distance before they were scared off by a bus. They continued to fly between bushes and aerials before flying off over the houses. Bird number 94 of the year so far. 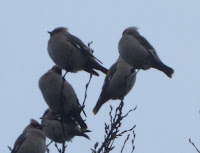