No birds, but a Bird's Nest

The "no birds" bit isn't strictly true, although no interesting birds probably is. A walk around Whitlingham after the strong winds was notable only for a female Goldeneye, the first I've seen there this autumn. The best part of the day was finding a number of Bird's Nest fungi (Crucibulum laeve) on twigs near my house. (Well worth looking up on google). These tiny fungi are apparently not uncommon, but due to their size are just rarely recorded. There are 39 records from Norfolk up until 2007, from only 7 observers and none since 2002, although I think specimens have been found at one other site this year and are yet to be added to the database. Later I participated in a fungus foray at Whitlingham. I committed a schoolboy error in forgetting to take a pen, and listed everything we found using Cath's eyeliner pencil, which worked surprisingly well.
. 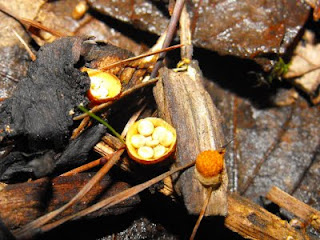 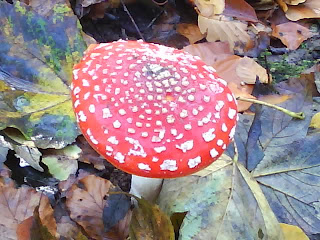