.
Saturday started with rain, and I was considering not bothering to leave the house until Gary called to say he was already at Sheringham. Sportingly he came and picked me up from the city, and we headed to Burnham Market to search for the Snow Goose that has been in the area for the past few weeks. To cut a long story short, we searched between 6000-7000 Pink-footed Geese, in three large flocks and a number of small ones, over the course of a day. The possibilities are extensive, Snow, Barnacle, Tundra Bean, Whitefront, Ross' etc. We saw one Pale-bellied Brent Goose. Bugger. But at least we were out looking. We did detour to Holme briefly in the hope of picking up the Rose-coloured Starling seen heading West from Titchwell, and managed to see two Shorelark for our troubles. On the way back Gary relocated the GW Teal at Cley, along with a Water Pipit.
.
On Sunday the weather was even worse, but me & Cath joined Gary & Claire for a trip to Minsmere. We got soaked in Island Hide (the window seals have gone, leaving a large gap for water to spray in), but consolation was the long-staying Great White Egret standing at the back of the pool. Other decent birds included Bewick's and Whooper Swans, leucistic Mallard and Moorhen, Water Pipit and a 3rd year Caspian Gull. The GW Egret was my 2nd, the first being a trip to Cley with my dad 15 years ago!
. 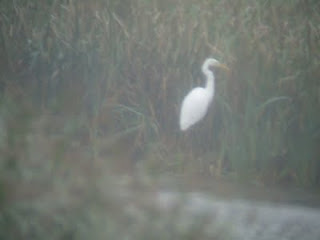 Great White Egret in the rain.

.
Well done to all of the birders involved in settling the Greenish Warbler dispute. I think we've had enough Phylloscs for one year now (except maybe a Hume's at Holkham, fingers crossed).
Posted by James Emerson