Knowing some local birders hadn't managed to connect with the Shag yesterday I made a slight detour on my way to work to look for it on the river near Friar's Quay. It was immediately visible, and I was pleased to see it swimming and diving (there had been a suggestion that it might be ill due to its inactivity yesterday). Once again the light was too poor for anything other than record shots, but I got one showing the arts college in the background before texting the bird in and heading to work. 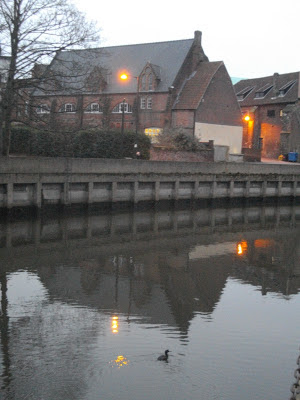 After work I went and saw that the Shag was still present, but it appeared to have gone to roost for the evening on a muddy bank along the edge of the river, just below Elm Hill car park.

[Update] I have heard today that the Shag was found dead this afternoon near Cow Tower, which is sad. Incidentally a bit of (careful) research has turned up an article written by Michael Seago that reports that Shags have been seen in four winters in Norwich near the old technical college (presumably now the Arts College), so this is a bit of a city hotspot. The only sightings I know of in the past ten years were the bird near Carrow Road in 2009 and two seen at Whitlingham (Jan 2010 and Sept 2011).
Posted by James Emerson