Having moved house the previous week, I took a couple of hours out to go to UEA to look for Norwich's most recent damselfly addition, Willow Emerald. Willow Emeralds are a recent colonist to Norfolk and had been largely restricted to Strumpshaw Fen for the past few years, however earlier this summer they had been seen on a stretch of the Yare near Cringleford and near UEA, and more recently the stretch in between. On my way I cut through the woods at the bottom of Eaton Park, seeing this Common Cow-wheat (pictured below). Although commoner than Crested Cow-wheat, which I went and saw earlier in the year, this is still a scarce plant in Norfolk. 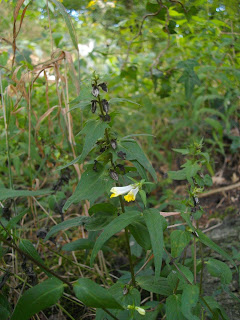 I spent some time near the little pond just along the boardwalk from UEA Broad looking for easily photographable Willow Emeralds, but couldn't see any there. I set off along the path, and eventually found four, including a mating pair. Unfortunately I didn't manage to get any photos to improve on last years digi-binned effort, but I was at least able to enjoy good views of them along the far bank of the river. As well as an egg-laying Southern Hawker and four Migrant Hawkers, I also saw quite a bit of other wildlife. I'm still trying to identify this velvety white bracket fungus, but there were several more identifiable species present too. 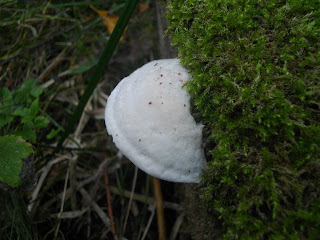 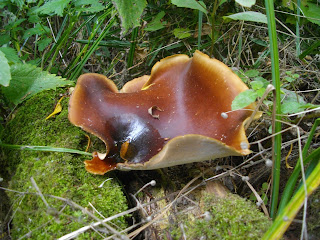 Polyporus durus or badius, I need to double-check

I also spotted this interesting bug, which I think is Corizus hyoscyami. Bird-wise I saw a couple of Kingfishers and heard Cetti's Warbler and Chiffchaff. 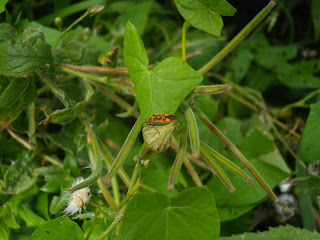 On my way back I spotted this caterpillar on a fruit tree. It is particularly interesting because it is a Grey Dagger caterpillar. When the moth emerges it is identical to the Dark Dagger unless you kill it and dissect its bits, so the caterpillars represent a non-lethal way of securing a positive ID. 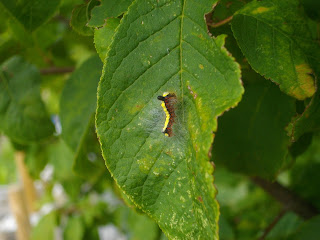