WHITLINGHAM: A bit of winter wildfowl

Luckily the flood waters had little effect as far as Norwich (Thorpe Marsh suffered a bit of flooding but that was about it). I headed down to Whitlingham to see if any birds had arrived from the coast. This time last year was my most successful day at Whitlingham, finding Ring-necked Duck and Common Scoter, but there was nothing so exciting this time. The scarcest duck of the day was Shoveler, six of them on the Little Broad, and there was around 200 Gadwall, up on the last couple of years. Two Little Grebes were near the main island, and there were also a couple of Great Black-backed Gulls around.

I decided to spend a while at the slipway looking for more colour-ringed Black-headed Gulls. Despite some controlled wildfowl attracting with seed (and some uncontrolled attracting by families with spare loaves of bread) none of the gulls seen were ringed. Many of the Mute Swans and one of the Canada Geese were, but only with metal rings, which require much closer inspection! I did get a decent look at one though, as it was eyeing me up as a potential food source. 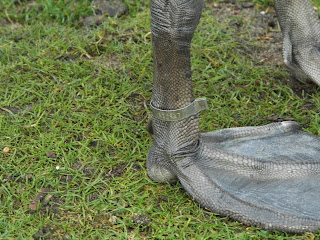