An overcast day, and lots of people about for half-term, but I wanted to get out of the house so I went for a morning walk around Whitlingham. Resurfacing work around the northern edge had scattered the ducks across the wwhole Broad, although someone later picked up the Smew near the island. Bird of the day undoubtedly a Sparrowhawk that flew across my line of sight and onto the island. I heard my first Cetti's Warbler of the year, but no chance of finding it. 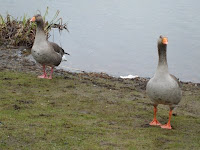