Another unemployment-fuelled trip to Strumpshaw, but still no Penduline Tit! No sign from the Fen Hide all day, although I did speak to a birder who saw it briefly alongside the path towards the river. He has also seen it at Wheatfen, maybe that should be my next trip. The day wasn't a complete washout however, with four good flight views of Bittern, including one close flypast. Once the drizzle settled in I decided that there was little point waiting, so I went for a walk in the woods. I finally caught up with the local Reeve's Pheasant, a non-BOU tick and a smart bird to see, with its 32-foot tail. I was scanning the alder carr when I came across a sphinx-like Chinese Water Deer, and further along the path a bird appeared to fall out of a tree, before recovering and swooping upwards. A slightly-lame drumming noise confirmed my initial suspicions, Lesser Spotted Woodpecker! I was a little disappointed with the display flight, but a good bird to get nonetheless. Four Treecreepers, five Snipe and a Sparrowhawk were also of note. 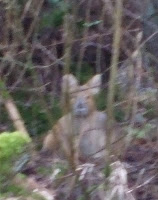 Blurry photos from the woods.