Fancying a walk, and still trying to find my own Garganey (it's fine, I've given up now, I'll wait until August and twitch one at Cley ;-0) I roped Adam into getting the bus to Rockland and walking back to Norwich. The day started well, 3 Chiffchaffs singing in the car park, creating a slightly disorientating atmosphere. I managed to home in on one singing from a conifer. A Kingisher called as it flew across the staithe. Not much about on the broad, although we obviously missed a treat as the sightings board had "a shark chasing another shark, wow awesome" as a recent entry.
A walk around Wheatfen was pleasant, we had a chat with David Nobbs the warden, who directed us to some good examples of Scarlet Elf Cup fungus. I finally got my Cetti's Warbler, with one shooting across the path. A walk around Surlingham Church Marsh was fairly birdless, 20-odd Teal and 2 Shelduck the only wildfowl. Through Bramerton and a Lesser Spotted Woodpecker called and then flew out of the top of a tree, a surprising find. At the top of the hill, the resident Lapwing were calling occasionally. Whitlingham was disappointing, a Little Grebe was probably the highlight.
Scarlet Elf Cup 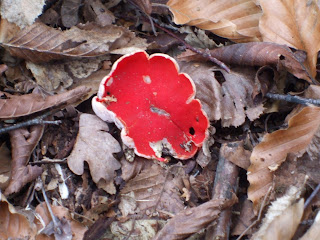 Year list 151 species.
In the evening I managed to drag my aching limbs to the Horse & Dray, where we won the pub quiz, with the aid of intelligence-giving Adnams Explorer.
Posted by James Emerson