Dad gave me, Adam & Cathy a lift to the Birdfair at Rutland Water. It was good, but I don't think I'll be going regularly. Having walked past most of the foreign holiday stands, we met Simon King, who was very nice, and caught the end of the Wildlife Brain of Britain, won by Chris Packham. Adam scraped together all of his coppers and bought himself a new telescope and tripod, whilst I limited myself to the "Birds New To Norfolk" book.
.
After a couple of hours we went and did the hides, seeing two Osprey and a Wheatear on Lagoon 4, and a hunting Osprey from one of the other hides. The resident Scaup was in fron of the main birdwatching centre, as was a Green Sandpiper. We went round to the Lyndon reserve, where I got a few record shots of Tree Sparrow on the feeders. We saw 6+ Buzzards and 2 Hobbys throughout the day.
. 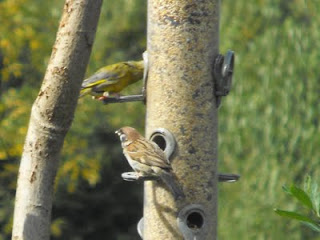