11th August 2009
Following reports of a possible Semipalmated Sandpiper at Cley the night before, me & Adam decided to go along early morning to have some Calidris ID fun (or not). Probably for the best, the bird was long gone, although there were a lot of Dunlin, each checked thoroughly. All Dunlin. A few Greenshanks and Green Sands were dotted around on Simmond's Scrape, but Pats Pool was almost empty. My first Wall Butterfly of the year flew past on the path beside the main road, and I was looking at another on east bank when about 60 people walked past, presumably some sort of walking tour. Shortly after that we gave up at Cley, and walked towards Salthouse. We fluked a Roseate Tern on Arnold's Marsh, watching it for about 5 minutes before it flew west.
We put in 30 minutes seawatch, seeing a few gulls and terns, plus a Fulmar west. At about this time and unbeknown to us, a probable Slender Billed Gull flew east past Cley. The times were about right, but we didn't see it pass us! Our "easterly" count was 1 Sandwich Tern and 2 Cormorants. Que sera sera. The Ruddy Shelduck I saw last week was still kicking around on the marshes near Salthouse. Having received a text from Gary informing us it had passed and we obviously weren't looking hard enough, we went to Sheringham seafront to check any loafing gulls. This took ages, as there were vast amounts of really slow walking people. Some of them probably started walking down the high street in July. Anyway, people were everywhere, gulls were not. We did get a Gannet diving near one of the buoys, but that was it. Hopefully 3rd time lucky with Cley flybys.
. 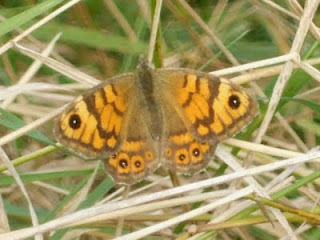 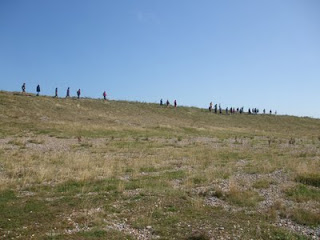 "And remember, you'll see most things if you walk along the skyline wearing garish colours and shouting. What's that Brian, you have a drum? Excellent!"