...the new detective series starting on ITV3. Not really, they only show repeats.
.
27th December 2009
.
With Cath & her mum having joined the NWT over Christmas, they wanted to go to a reserve. I suggested Barton Broad, certainly not just so I could have a look at the Fudge Duck. After braving the boardwalk, slippery with water and ice, we reached the viewing platform where four birders were looking fairly close in. I soon found the male Ferruginous Duck with a small group of Pochard near the tern platforms. As the bird was giving good views, I took the chance to use one of my Christmas gifts, a hardbacked sketch book. This is useful because a) my digiscoping is crap, and b) I realised this year I don't take enough notes, and if I want to get birds through rarity committees I need to start taking more! Below is todays masterpiece (yep, I took pencil crayons too!). All in all a success, but I don't think many birds are going to make as obliging subjects. There were 20+ Goldeneye on show too, and lots of Fieldfares.
. 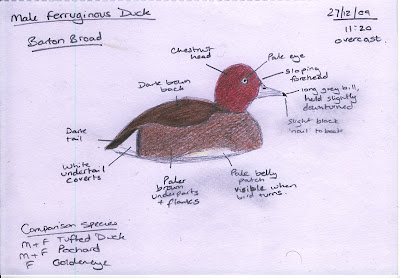 My Fudge notes. The blue line on the left is a scanner artefact.

We took a slow drive along the coast as far as Walcott, but didn't see the Cranes. Lots of Lapwings around Brograve farm though. Back in Norwich we stopped at Whitlingham, and after a short walked along the south shore my scope was full of diver. Presumably the Strumpshaw bird, I had hoped it would drift along to Whitlingham before Christmas, but better late than never. It was diving a lot, and will hopefully make its home there for a while so I can get better views later in the week. The broad was full of Coot and Gadwall, and a Grey Heron looked uneasy on a post, as if it was minding the space for a Cormorant and hoping it wouldn't be long. I might put a photo of the diver up, but its hardly worth it, it was so low in the water you can only see a third of its body!