19th & 21st December 2009
Saturday was still snowy, so I ditched any ideas of heading to the coast and instead went to Whitlingham. A flock of around 30 Siskin and Goldfinch were in the alders, and Cath noticed a Water Rail skulking near the path. At the end of the Little Broad a Grey Heron and a redhead Goosander (a long overdue patch tick) were standing on the bank.
.
The Great Broad held a vast number (400+) Gadwall, and probably a similar number of Coot. Cath spotted a Weasel near the path to the bird screen, whilst a Cetti's Warbler flew up out of the reeds. The north-east corner of the broad had flooded the path, so we hurried around the final part of the lap to go home and dry off!
.
On Monday I decided to spend a whole day at Whitlingham, hoping to catch some winter migration. The Little Broad had frozen almost completely, but along the back 11 Shoveler represented an increase on previous numbers. I started counting the Gadwall, when I heard some children chanting ho-ho-ho. Never a good sign. The ducks started moving as Santa arrived on a boat. I bet people who patch-bird at Cley never have these problems. A few Teal and Wigeon were on the Great Broad, but no sign of anything better until I stopped to talk to a fellow birder who picked up a redhead Goosander flying past us.
.
Small numbers of Lapwing flew west all day, the biggest group around 55. There had clearly been an arrival of Snipe recently, I saw 15, several in flight but most flushed. More impressively was my first patch Woodcock, making a nice change from Snipe! A group of 13 Skylark also flew west, a notable record. Other decent birds included 3 Kingfishers (Trowse Meadows, Little Broad and Great Broad), a Marsh Tit, several Song Thrushes and some Redwing. The snow may be over, but hopefully there is still time for a rare grebe or diver to find a temporary home.
. 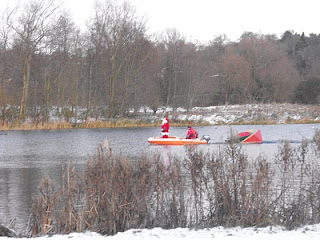