Gary & I had originally agreed to go to Wayland Wood to see if there are still any Golden Pheasants there, but on the day we decided to head for the coast to fill in a few gaps in my year list. We arrived at Docking and scanned through thousands of Pink-footed Geese in the hope of finding the Snow Goose, but no luck. On to Holme, and we suceeded in seeing Long-tailed Duck, Gary picking up three just offshore. We cut inland towards Wighton to look for more geese, and duly found another flock. We scanned this one for a while too with no luck. I later found out the Snow Goose was at Holkhma, but hey, you can't win them all. 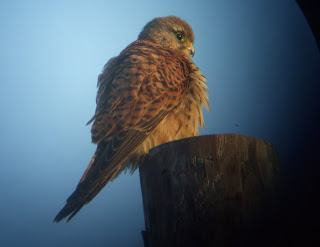 Giving up on geese, we called in at Cley, where a flock of Twite have been recently. Suffice to say they weren't there whilst we were, but we did see a Kigfisher and a Jack Snipe, whilst a Kestrel proved an obliging subject for a while. The last target of the day was Merlin, so we headed to Stubb Mill. We were doing well, Gary called 4 Cranes and I spotted a ringtail Hen Harrier, but banks of mist/fog rolled in and put an end to the fun.
Posted by James Emerson