Spring is well and truly in at Whitlingham now. The first goslings of the year are a brood of four Egyptian Geese, occupying the area around the slipway. A singing Willow Warbler on the 5th was a week later than last year. Around 25 Swallows and a Sand Martin were still hawking insects, albeit higher than when they first arrived, and a female Blackcap was in scrub by the Little Broad.
.
Away from Whitlingham I saw four Firecrests and some late-ish Redwing in the Brecks, and my first Willow Warbler of the year at Sparham (2nd April). I missed the Garganey at Buckenham, but saw summer plumaged Water Pipit, Little Egret, Avocet and a Stoat.
Pubs & Beer
A visit to the newly re-opened Coldham Hall pub at Surlingham was a bit of a missed opportunity, with few birds about on the river. We did manage Great Crested Grebe and Grey Heron, whilst Coal Tit and Chiffchaff remained heard only. The railway cut off our view from The Rushcutters at Thorpe, but patience paid off with flight views of a Great Spotted Woodpecker. In the Woolpack in Norwich I sampled a limited edition Woodfordes beer called "City", but it wasn't anything to write home about it. More impressive was Badger's "Golden Glory" with a hint of peach.
Fungi
On the last day before the Easter break we discovered a Morel at work. There are three species found in Norfolk, but this seem to resemble Morchella elata most closely. 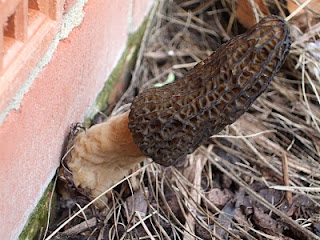