28th & 30th April 2010
.
Following on from the weekends Bluethroat, another two cracking birds turned up on Wednesday (unless you consider Tawny Pipit cracking, in which case three). I was so psyched by the thought of seeing a Hoopoe I began walking to the train station straight from work, minus optics or any real plan of action. Luckily I got a phone call offering me a lift later on, so I had time to go back, eat and get my 'scope. Gary did the legwork on site, relocating the bird and keeping it in view until we arrived. We watched it sit in long grass along the edge of a field, before it spread its ridiculous wings and lolloped off.
.
Winterton (and indeed most of the east coast) is a bit of a pain to get to via public transport, so I was concerned I would miss out on the male Woodchat Shrike. Gary came to the rescue, giving me a lift after work on Friday. There were only two birders on site when we arrived, neither of whom had seen the shrike. I managed to find it, getting flight views as it zoomed into some small trees on the bank. There was a tense wait to see if we could refind it (there was nothing else it could have been, but I didnt really want to tick it on those views). Eventually it popped up, Gary got it in the 'scope and all was well, even better than the Hoopoe. On the way home we called into Barton to look for Adam's Arctic Terns, but only found loads of Common Terns.
. 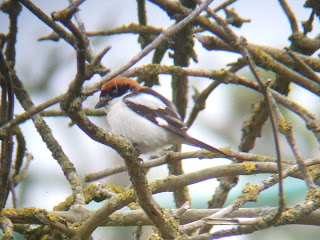