Guns and warblers at Whitlingham

.
On Tuesday evening, late news came through that a Slavonian Grebe had been present that day. Still needing Slav for my Whitlingham list, I headed down at dawn to try to relocate said bird. Walking down the lane a Red-legged Partridge came out from the bank on the left of the road, wandered down the road before hopping into the field on the right. Only my second patch record, although perhaps an unsurprising bird to find here. Extensive scanning of the broad failed to turn up any grebes other than Great Crested and one Little. My first Sedge Warbler of the year was singing from brambles on the riverbank, along with a Willow Warbler nearby and a male Blackcap singing along the Little Broad. Near Whitlingham Hall there was again no sign of any Little Owls, I think Adam's sighting must have been a one-off as I have checked that tree to death! Three Starlings over were an embarrassing patch year tick.
. 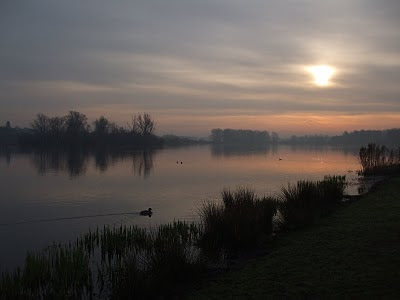 Whitlingham at dawn
.
For those who don't have access to Norfolk & Norwich Naturalists publications, this months "Natterjack" included a story of how an individual with a telescope at Whitlingham was accused of having a gun by a member of the public and the police called. It ran that a woman thought that the birder was shooting ducks, then thought he was pointing the "gun" at her, then the police turned up and it was all sorted out. Similar events have happened in the past, I vaguely remember it happening to a famous naturalist, maybe Ted Ellis , with a butterfly net? I do however find this particular story quite odd. Most people at Whitlingham dont bat an eyelid at telescopes, and those that confuse them always presume its a big camera. Without dead ducks and bangs, why think its a gun? And wouldn't a (presumably armed) police response have at least made the local press? If I'm wrong and you have been accused, then do leave me a comment!
Posted by James Emerson