The main purpose of the evening was to show Cathy some Nightjars. She wanted to see a perched one, but I've only managed that once, so I persuaded her that flight views would be just as good. Standing at our chosen heathland location we picked out a Noctule Bat each before the churring started at around 9:30. Despite at least three churring males and occasional flight calls, we failed to pick out any as darkness fell. Finally we saw a Nightjar, as a female ghosted across our path. We saw presumably the same bird in flight another two times, but by now picking up birds against the dark trees was becoming impossible. Whilst waiting I heard my first Turtle Dove for the site and a Tawny Owl called from nearby woodland.

We spent a further hour-and-a-half around a moth trap that had been set up close by. There was a marked contrast between the species we'd been getting in Norwich and the ones caught, unsurprisingly. Highlights included a number of Rosy Footmen, Pine Hawk Moth, Buff Arches, Black Arches and my first Pretty Chalk Carpet. 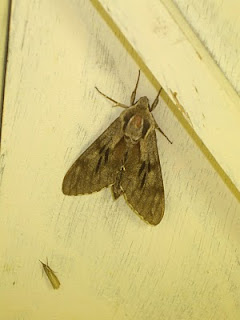