Ever since I first went birding as a seven year old I have had a mental list of birds ("in my head" rather than "crazy") that I would like to see. One of these is Pied-billed Grebe. It could well have been because it was so close to the start of my bird book, but was undoubtedly also because of the charismatic look of the bird. I therefore jumped at the chance to go and see the Pied-billed Grebe that has taken up temporary residence at Hollingworth Lake in Manchester. When we arrived it was showing well, diving and shooting backwards and forwards along the bay. This was obviously tiring work, as it then swam to the back of the bay and snoozed against the reeds. Over a prolonged period we watched as the grebe preened, scratched, yawned, collected weed and swam along with a Moorhen-esque clockwork movement. A cracking bird and I for one will be keeping a close eye out for another Norfolk record. 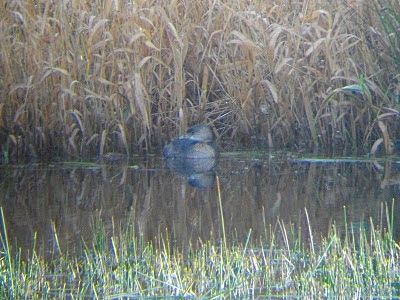 Back in Norfolk with a few hours of daylight left, Gary & I headed to Titchwell to have a look at the new path and search for the Pallas' Warbler seen in the week. A Treecreeper was the only bird of note in the trees near the visitors centre, and as suspected there was no sign of the Pallas' Warbler around the meadow trail. The new hide looks interesting, and just past it three Twite flew onto the saltmarsh, feeding near some Skylarks and oddly two Chaffinches. Incidentally Gary picked up the Twite by call, which he described as a "broken Linnet". We also saw a Cetti's Warbler before more searching of the bushes around the carpark. With the light fading we called it a day. 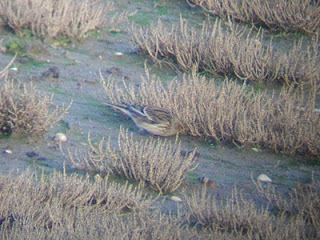