Birding during the week is now down to about 15 minutes of light in the morning, enough to confirm that Waxwings are everywhere and all the Long-tailed Tits flying through the garden are rosaceus. Once the rain had stopped on Sunday I wanted to get out to the coast, and Cathy's mum offered to give us a lift to Cley. It was very busy, but after getting our permits and having a chat with John Furse we headed to Bishop's Hide. I got some half-decent photos of a Common Snipe close to the front of the hide and we admired the Teal and Wigeon. After a while a head bobbed up in the reeds, and Cathy had seen her first Jack Snipe. It took a while before I could get the 'scope on it, but we got there eventually. No sign of the leucistic Brent Geese in the flocks I scanned, and the sea was similarly quiet. The amount of people on the shingle probably accounted for the lack of a bunting flock, but there was one more lifer for Cathy, one of the Grey Phalaropes was still spinning on Billy's Wash. 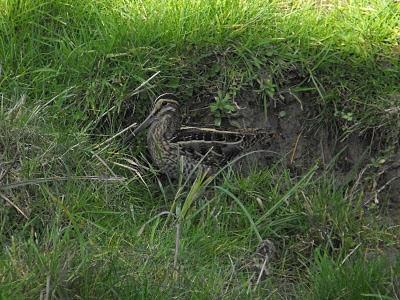