After a trip to Cley Spy and lunch at the Three Swallows (Highly recommended. Has anyone tried the Wild Boar, Turkey, Hare & Pigeon pie?!), Dad & I headed to Cley for a quick look round. We were greeted in the carpark by an enthusiastic Northerner imparting the directions "third bird from the right" to a couple nearby. A quick glance revealed that the 3rd bird to the right was the long-staying American Golden Plover. After getting our permits and some Christmas cards we went to Bishop's Hide, where I digiscoped this effort. The AGP had moved a few birds in, but bearing in mind there were 1000+ Golden Plover, it was still behaving very well. A Water Rail on Carter's Scrape and a Little Grebe in the roadside dyke were the other birds of note. We stopped off at Salthouse beach carpark for a coffee (the only coffee sold from the back of a van endorsed by Birds and Beer) and watched a lone Turnstone patrol round the outside of the car. 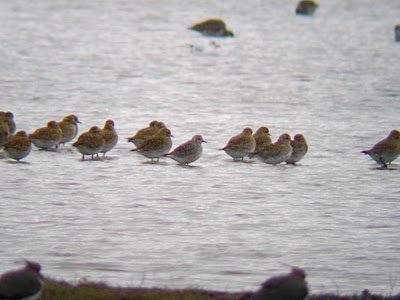