2nd October 2011
I had intended to go to Whitlingham, although I hadn't exactly decided what it was I expected to find, other than hundreds of people. Luckily I was saved from myself by the news that the Sandhill Crane had been located in Suffolk. Thanks to Cathy & Margaret who agreed to give me a lift, and to Gary who gave updates as it flew around a bit, we arrived in Boyton, parked outside the village so we weren't obstructing anyone and got there just in time. The Sandhill Crane was standing in a stubble field, and we watched it for around 10-15 minutes before a microlite spooked it and it circled then flew over the hedge. Someone had the presence of mind to set up a collection basket for the local church to try to keep onside the bemused (and in one case livid) local residents, and I see that since then the church carpark is being used.

The crane has also made it onto the Norfolk list (or it should do once the formalities are gone thorugh) by virtue of a retrospective identification from some birdwatchers at Snettisham. As frustrating as it is to not see the bird in Norfolk, it is surely a good thing that the bird can take its place on the county list, when everyone realised there was a very high likelihood that it had gone through or around the coast of the county in reaching Suffolk. 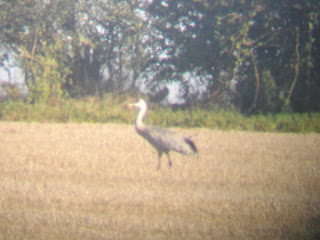