30th October 2011
Apologies for the 'blank' post before this one, I am short of time and wanted to post about the owl.
On Friday evening a Short-eared Owl was reported at Thorpe Marshes. This represents a great sighting for the edge of Norwich, but by the time I got there it was almost pitch black. I still had a look round (I would have seen it had it broken the skyline I reckon) with no luck.
Saturday I was out, so on Sunday evening I remembered that the clocks had changed and went to Thorpe at 16:00. The first half hour of my vigil sitting on the cattle pen was pleasant enough, with a noisy stream of gulls heading back to the coast and a couple of noisy Grey Herons around too. Then the moment that in all honesty I didn't think would happen, a Short-eared Owl flew up from vegetation near the broad, and did a sweeping flight around the marshes. Less than a minute later it was gone, flying over Bungalow Lane. Absolutely amazing. I've seen a fair few SEOs at the coast, often in daylight, but for some reason this one on the patch was much more thrilling.
As the light got worse I decided to get up and double check that it hadn't flown behind some of the willows. At that point the owl flew back into view, coming in high over the poplars. I managed to get one sort of in focus picture (it is a SEO, honest!) as it flew over my head and out of sight. I waited ten minutes and then began walking back, only to get my best views as it flew across the path in front of me and then alongside the path at close quarters. A really enjoyable evenings birding.
At the time I presumed it would be the first Thorpe/Whitlingham Short-eared Owl, but as it happens I have just got my copy of the Norfolk Bird & Mammal report for 2010, which says that a maximum of three were seen at Whitlingham Marsh during the winter of 2009/10. Incidentally Whitlingham Marsh could refer to the council owned nature reserve of that name, or the marshy area behind the sewage works (with no general access) that is referred to as Whitlingham Marsh on Ordnance Survey maps. The only other B&MR nugget I have seen of interest to Whitlingham folks is a max count of 30 Little Grebes in Feb. 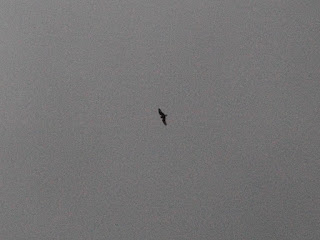 [Update] For those wanting to look for this bird, it is still being seen 10/11/11.
Posted by James Emerson