1st October 2011
Another hot day with southerly winds, making searching for migrants that little bit harder. I decided to have a walk around the dunes and scrub north of Lowestoft. The banks of brambles that should have a nice mix of outgoing warblers feeding up and incoming birds were empty. The only thing that was in the dunes were semi-naked old people burning their skin, and that wasn't an encouragement. Walking back along the beach a Red-throated Diver landed on the sea, still partially in summer plumage. A Grey Seal emerged with a fish and was mobbed by gulls, and four Med Gulls flew around. 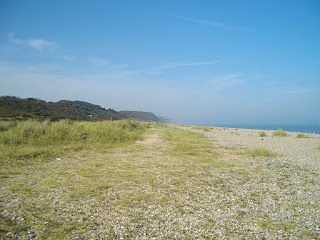