On Wednesday a select bunch of Yare Valley birders embarked on a birding day out to the Brecks. Whilst I can't compete with Jim's erudite trip report (http://jimsbirdingblog.blogspot.co.uk/2015/04/the-end-of-beginning.html) or Ben's excellent Firecrest photos (http://bensbirding.blogspot.co.uk/2015/04/brecks-and-strumpshaw-update.html), this is my brief summary of the day.

Ricky & I left Norwich just after six and travelled to a forest ride deep in the Brecks where we met Jim & Ben. We were hoping to locate some Golden Pheasants at a site that Jim had seen several in the past. We couldn't hear any calling, which we took as a bad sign, but nonetheless set off patrolling the rides and looking down the gaps between conifers. With no sign of any Goldies we eventually gave up, although good views of a Woodlark were of some consolation.

Jim previously lived in Suffolk, and his local knowledge allowed him to smuggle us across the border into Suffolk without alerting the border patrols. The omens were bad when I got out of Ricky's van to find that he had parked on an already-decaying dead squirrel. At this site too there was no sign of any Golden Pheasants. The highlight for me was Brittle Cinder fungus (Kretzschmaria deusta), whilst for the others probably a Nuthatch. With the smell of disappointment (or was it that squirrel?) in the air, we headed back into Norfolk.

We were running out of accessible Golden Pheasant sites, so we decided to switch focus to some other Breckland species. Santon Downham wasn't heaving with birders, but neither was it heaving with birds either. We saw some Mandarins, including one high up in a tree, plus Brambling, Lesser Redpoll and three drumming Woodpeckers, all Great-spotted. As we were preparing to leave Ben picked up a distant Goshawk over some nearby woodland. 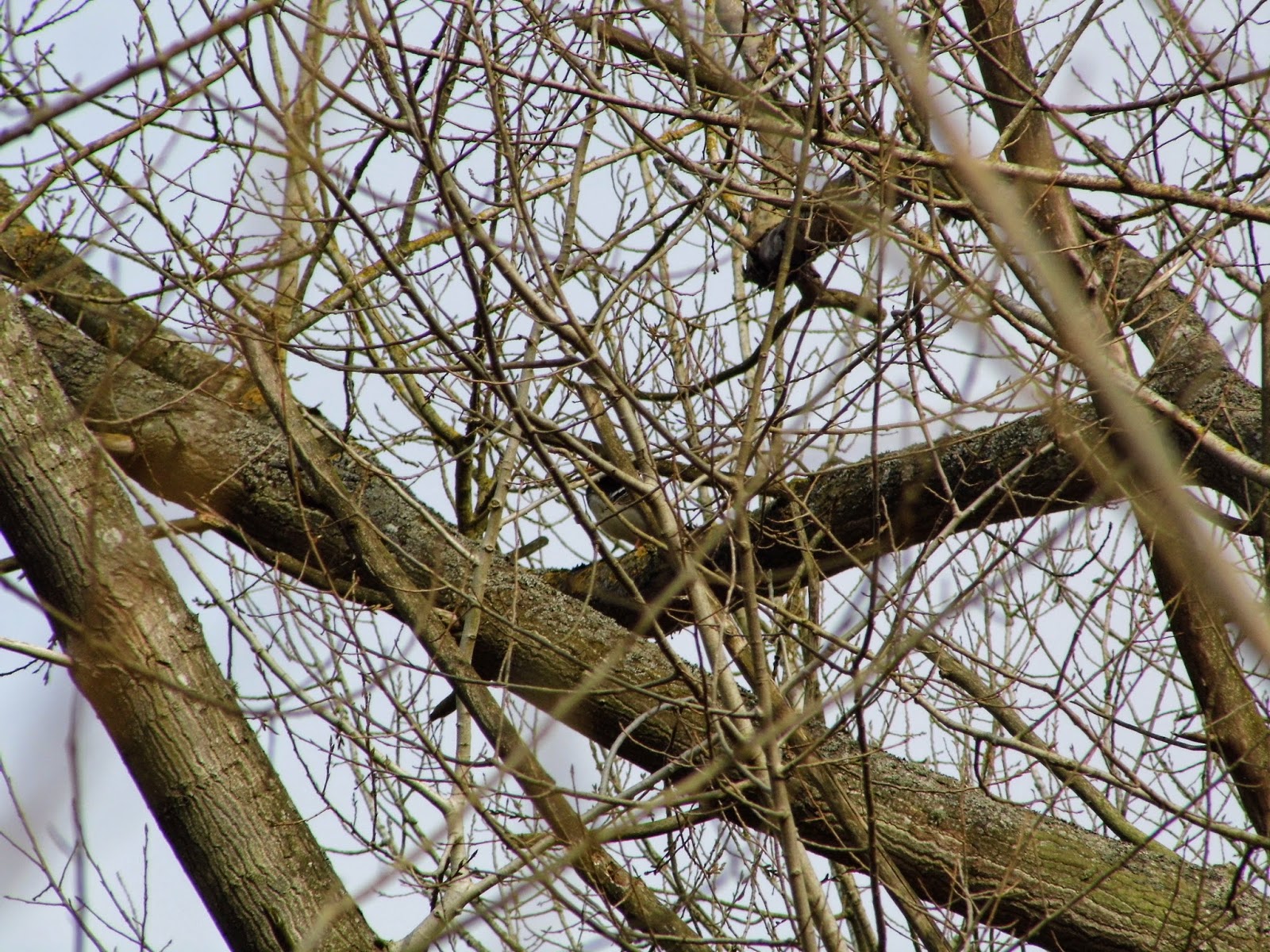 As the day brightened up we headed to another Breckland site where we got some excellent views of a displaying Goshawk, which we all enjoyed very much. Afterwards we headed to East Wretham, having a good chat with the warden before saying goodbye to Ricky, who had to go to work. The remaining three of us headed off to Lynford Arboretum. We did spend a bit of time around the gate, seeing Brambling, Siskin and Nuthatch, but no Hawfinches. Having heard several Firecrests we finally got great views of one as it foraged amongst the Bluebell leaves, behaviour I'd never seen before from this species.

Leaving Lynford we did a bit of minor-road birding. Three Red Kites tussling over a field would have been a nice sight in itself, but they continued towards us and passed low over the car to give cracking Gigrin-eque views. A little way away we saw three Stone Curlews in a field. We all remarked that it was nice to see what they looked like without them being wobbled by heat haze.

Our final stop of the day was an area of forest where we hoped to see Willow Tit. We walked down the main path full of expectation. As it was we managed to save ourselves the trouble of writing out a pesky description for the rarities committee by not seeing any. We did see a Roe Deer. It stared back at us for quite some time, but as it turned away first we claimed victory over this denizen of the woods. 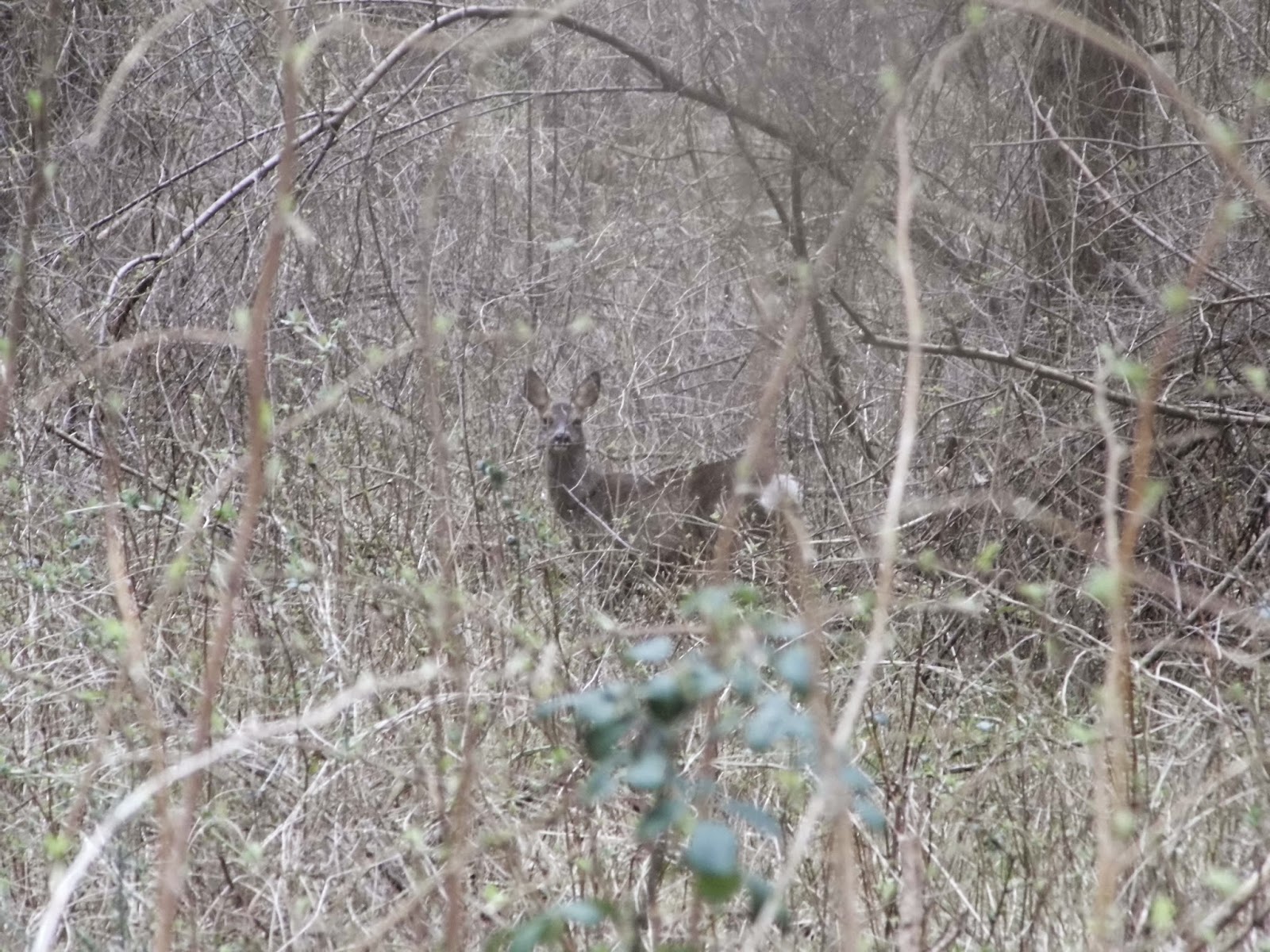 Despite missing out on the Golden Pheasants and Willow Tits we all had a good day out, thanks to Jim for composing our itinery, and to Jim & Ricky for sharing driving duties.
Posted by James Emerson