Justin had texted me on Saturday to wish me good luck with the final WeBS count of the year, a reference to the heavy fog that would have made counting the far edges impossible. Fortunately for me, Sunday was clear and there were no issues with the count. That said, with handover of our rented house looming and Cathy’s sister visiting from Germany, I had set myself a two-hour limit to get the count completed in.

The Little Broad was still tricky to view because of the vegetation that has grown up around it, but it didn’t seem as busy as it has on previous occasions, 50 Gadwall being the only count of note. Moving to the Great Broad it was immediately obvious where most of the birds were! Huge numbers of Tufted Ducks and Coot in particular were spread out over the whole broad. Scanning from the west end I was mid-way through counting Tufted Ducks when I spotted a female duck that had more white on around the bill than the rest of the Tufties. A closer look revealed that the white didn’t quite meet in the middle above the bill, so when I went round and looked from a different angle the seed of doubt had been put in my mind. Side-on it looked good for Scaup, but didn’t seem noticeably larger than the Tufted Ducks in front of it. Knowing that I had a big job on to count everything I digiscoped some shots, recorded it as Scaup-like Aythya sp and carried on. At my in-laws I uploaded a photo to Twitter to ask hybird guru Dave Appleton his opinion, and having reviewed my photos and seen feedback from others it was clear that the bird was a ‘pure’ Scaup, presumably a first-winter, hence the brown centre above the bill. So a bit of a cock-up, but a reminder that this was only my third Scaup here in 10 years and fortunately it was still present by the time news went out. 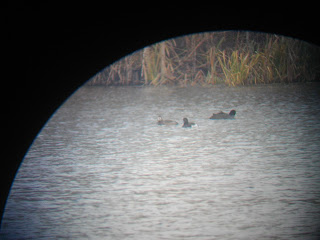 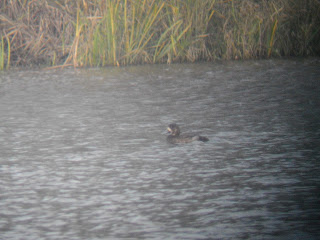 I carried on around the broad, tallying up the ducks. I don’t actually add up the final number until I get home, so whilst I knew it would be a big number (I had to go onto the next page for both Tufted Ducks and Coot), I hadn’t realised that the Tufted Duck count actually appears to be a new high count for Whitlingham – 384 birds, whilst the 371 Coot is the highest since 2010 as far as I know. It is interesting that despite the winter not being a harsh one, several species are present in markedly higher numbers than in 2015.

December comparison figures below (2015 in brackets)
Other birds of note included a drake Wigeon in the conservation area bay but only visible from the south shore, and the female Ferruginous Duck x Pochard hybrid.
Posted by James Emerson