A mixture of packing, decorating, moving house and cleaning meant that I had little time for nature-related activities during late November and early December, but by mid month things had settled down. Unfortunately there have been delays in sorting out internet access to our new house, so I’m taking the opportunity to chronicle my pre-Christmas trips in a multi-post extravaganza.

On Saturday I was invited to lunch at Sandringham, albeit at the country park café rather than the royal house. The purpose was mainly to plan next years Fungus Study Group programme, but also to have a short foray beforehand. I set out early, partly because of the dense fog, but also because I wanted to make a diversion in west Norfolk to a site where I had been told that the recently named earthstar Geastrum britannicum grows. This species had been recorded in Norfolk for several years but thought to be merely a variety of Geastrum quadrificatum until morphological and genetic studies showed it to be a distinct species. You can read more about the discovery should you choose in the paper Geastrum britannicum – a surprisingly common new species in Britain, published in Field Mycology but available through ResearchGate. I managed to see it, which was pleasing as it had been one of my target species. Although unlikely, Earthstars have in the past been taken by collectors, so I’m not naming the site on here lest you wonder about my vagueness around the location. 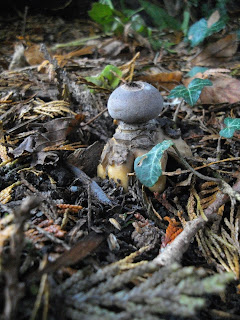 Setting off back into the fog I arrived at Sandringham, and it became clear that there was a good turnout (12 people). It also became obvious that despite our scepticism about the amount of fungi at the time of year, there was lots about – we could have easily kept going for longer than the 90 minutes we had before our meal was booked. Without seeing the final species list I know that I saw at least five new species, including the Mycena adonis var coccinea, coral Ramaria decurrens, Blue-leg Brownie and a white ‘snow-ice’ like species. I found a spikey mould growing from bird poo that Tony later confirmed as a third for Norfolk, the first two records being from Ted Ellis in the 1950s! Other commoner but interesting species were Collared Earthstar, Sessile Earthstar, Common Bird’s-nest and Pipe Club. 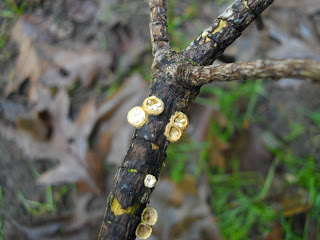 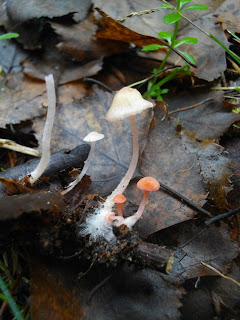 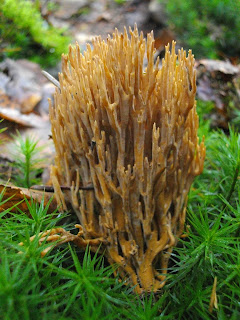 We had a nice lunch and managed to come up with a draft programme for next year that covered the different corners of Norfolk and a mixture of well and lesser-known sites. Thanks must go to Steve and Yvonne for their organising of the Norfolk Fungus Study Group activities, the forays this year have been excelllent. Incidentally one of the species from this foray is provisionally my 600th fungus species – provisional because taxonomic shuffling means that undoubtedly some of the species on my list can now only be regarded as senus lato (‘in the broadest sense’) when they have been split afterwards.
Posted by James Emerson