Having dropped Cathy off in the city, I had a few hours to spare. I decided to head to Holt Lowes, where Andy Musgrove had recently seen Poronia punctata, a scarce nail fungus sp. that grows on pony dung. I had previously looked for this species unsuccessfully at Roydon Common and equally unsuccessfully for the related species Poronia erici on rabbit droppings at Holme Dunes. Whilst there is no shortage of horse dung in Norfolk, the medication given to horses tend to kill off many of the fungi that may otherwise grow, so this species only occurs where the wilder breeds of pony are used for conservation grazing.

After heading out on to the heathland I had located some pony dung, but no nail fungus. Eventually I found some covered in small toadstools, probably Conocybe sp. Clearly this was a good age for fungal fruiting, and so it proved to be, with my first Poronia fruiting body. It hadn’t got as large as some of the ones that Andy had seen, but there we are. I considered whether to spend more time looking, but at the back of my mind there was a desire to go and look for the Todd’s Canada Goose* near Docking, which Gary had kindly texted me to say had been seen again this morning. In the end the goose won, and I headed back to the car. 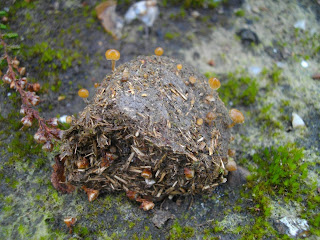 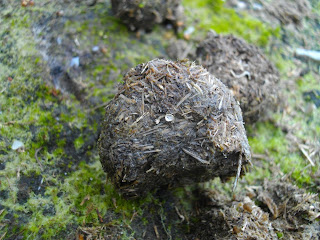 I headed past Holt and Fakenham before turning off to Docking. Out on the road to Brancaster I saw a couple of cars pulled over, so parked nearby and went to join them. There was a large flock of Pink-footed Geese, with many more behind them in fields further over, but upon scanning them I couldn’t see the Todd’s Canada Goose. The birders already present confirmed as much, several White-fronted Geese but nothing else so far. I waited whilst another large flock arrived, bringing with it several Barnacle Geese. A newly arrived birder then told us he had seen the Canada Goose in a field from the next road over, so I decided to head round that way in the hope it was still present. And it was! I was able to pull off the road and ‘scope the flock from the car, picking out the Todd’s Canada Goose without much trouble. Full of festive cheer I drove back to Norwich, arriving just in time to pick Cathy up from the city.

* Todd’s Canada Goose is the vernacular name for Canada Geese of the subspecies ‘interior’. There are a number of subspecies of Canada Goose, of which the smaller ones now form part of a separate species, Cackling Goose – BirdGuides did a useful article on which subspecies are ascribed to which parent species. Subspecies of both Canada Goose and Cackling Goose occasionally arrive in Norfolk with wild goose flocks, and as such are ‘category A’ birds rather than the resident feral flocks, which are on category C of the British list.
Posted by James Emerson