NORWICH: 3rd week of February and some Curlew at Hellesdon

I managed to get out for another local walk this week, choosing to go down onto the Marriott's Way and walk out westwards. Sweetbriar Marshes was flooded quite heavily in places (as you would expect from a floodplain) and I crossed over and went down Hellsedon Road for a while. It was nice to walk along the river, and Jay, Pheasant and Green Woodpecker were all new birds for the year. Scanning over the meadows between the river and Marriott's Way most of the birds appeared to be gulls, but further along a couple of Curlews were visible. They had first been seen a few days previously by Jo Dale, but I was pleased that they were still present given that I'd not seen any around Norwich before. I appeared to have timed it just right, because on my way home soemthing put up the gulls and the Curlews also took to the air, calling several times before flying off high north-eastwards. 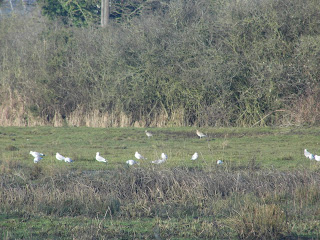 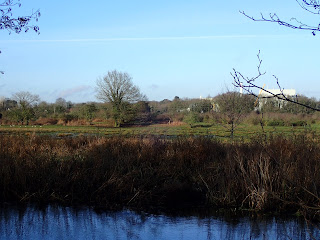 Back at home the warm weather brought up my first Buzzard of the year distantly over the housing estate.