NORWICH: Late March in the city

The third week of March was rather quiet sightings wise, with a few flyover birds on my daily walk in to work including Grey Heron and a couple of Oystercatchers, whilst I heard my first Chiffchaff of the year singing along Lakenham Way on 23rd March. I saw a new beetle, by virtue of it landing on my desk, Two-spotted Carpet Beetle (Attagenus pellio). There was also an avian highlight with three Red Kites flying over Bethel Street seen at close quarters. Having seen the first one I then got closer and saw two fly over heading in the same direction. I assumed at the time that the first one had looped round behind me, but other observers on the other side of Chapelfield Gardens confirmed there were three individuals. 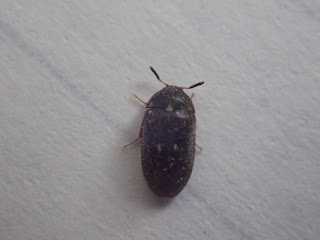