17th March 2009
Second part of the Wheatear hunt. Me & Adam went to Waxham, for an admittedly over ambitious early migrant hunt. The walk along the dunes between Waxham and Horsey was unproductive and hampered by fog. We found a flock of Reed Bunting, numerous Skylarks and more flocks of Meadow Pipits. At Horsey we looked over onto the beach where ~150 Grey Seals were lounging. We walked back down the Nelson Head track and I managed to see two Common Cranes across the fields. A walk around Horsey Mere failed to add any more species, but we got good views of Barn Owl and Marsh harrier. An early Grass Snake was basking by the path, and two more Cetti's Warblers called from cover. 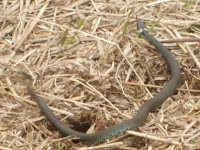 On the way home we stopped at Walcott, where we managed to locate the Mediterranean Gull, almost in full summer plumage.