Following a non-birding week (one heard-only Tawny Owl at Whitlingham the only bird of note), me, Gary & Adam started at 7. The idea was to have a look around autumn's adopted patch of Trimingham, before moving west looking for our own birds whilst being within reach of any rare stuff found by others. Trimingham clifftop wood was completely windblown, with only a small flock of Long-tailed Tits. Other areas of woodland were also barren, so we attempted a brief seawatch. Loads of Gannet, a few Kittiwake, and flocks of Common Scoter and Teal flew by. We then walked down the hedgerows around the church, with similar barren results.
.
We moved along to Happy Valley woods near Cromer along with Phil, who had joined us at Trimingham. The woods were less windblown, but still almost birdless. Another quick seawatch and obligatory explanation to curious passers by (sooner or later I will reply to "ooh, what are you looking at?" with "The Sea", but I'm trying not too give birders a bad name). It was now gone 10 and we'd found **** all, so decided to bite the bullet and go to Wells Woods.
.
After paying £3.50 for the privilege of parking on a field of flints, we left the dog-fouled paths and joined half of the birders in Norfolk camped out around the Dell. We picked out Coal Tit, Goldcrest and Treecreeper amongst the commoner tits and Chaffinchs, but no sign of any Icterine Warbler. A Wheatear up a pine tree was odd, and I saw the back end of a Pied Flycatcher as it dropped down into the undergrowth. The first Pink Footed Geese of the autumn flew over. We followed the tit flock, finding a Chiffchaff, then decided that it would be better to find a vantage point and wait for the birds to come to us. Well it wasn't any worse, and we even heard a Bullfinch. Phil found a Lesser Whitethroat in the landward scrub, and amongst the disappointed birders we saw our aquaintance from Herts ("Ortolan Man") and Dave Appleton. A Muntjac ran in front of us, followed shortly by a dog. Hopefully it was being led into a deer ambush.
.
We decided to end the day at Cley, getting decent views of the Red-necked Phalarope right in front of North Hide. We failed to see any Leach's Petrels, but a Puffin flew through the bottom of my 'scope view, and we were able to relocate it on the sea close in. Loads of Gannets, Kittiwakes and Cormorants, and a few Manx Shearwaters and Sandwich Terns passed by, and 2 Greenshanks were on pools near the eye field. Not a bad day, but my first decent seawatch at Cley in strong northerlies made me appreciate the Shelters at Sheringham that bit more! 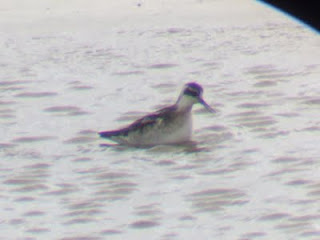