26th September 2009
An early morning trip to Caister St Edmund, and finally an ibis! It won't live long in the memory, brief views as I inadvertantly flushed it from the river, and watched it fly downriver towards Soke Holy Cross. I walked as much of the river as was accessable and hung around for another hour, but it didn't return. A bright morning and a couple of Kingfishers made the morning even better, although between 7:30-9 I didn't see another birder, which I found odd.
.
I had considered staying the day at Caister, but I wanted to see the Spotted Crake at Cley, following a few years without a visible one in Norfolk. I walked back from Caister and straight to the station, arriving at Cley just after 12. The crake wasn't showing, and a number of birders gave up or went to look for the Snow Buntings. Eventually I was the only one looking from the hide, and after a Water Rail (no confusion thanks to the big red beak) I saw the crake come out of the reeds in the ditch close in to the hide. I got the rest of the people in the hide onto it (they had been watching a Green Sandpiper on Pats Pool) and had another look, before going outside and calling in another 10 or so birders who were waiting near the pool along the path. The Spotted Crake re-appeared from behind some overhanging vegetation and strolled up the ditch. A cracking bird, probably my favourite bird of the year.
.
I walked along East Bank, hearing lots of Bearded Tits and 2 Water Rails. Walking along the shingle bank I came upon a flock of around 20 Snow Buntings, which came close when I stood and waited on the ridge. I also found what I presumed was a seal carcass (suggestions so far are Harbour Porpoise or Tuna), and had a dark-phase Skua sp. past west.
. 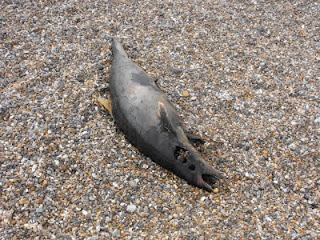 The consensus appears to be Harbour Porpoise, another dead mammal tick! 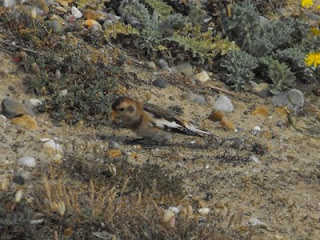