With good seawatching days at a premium, me & Adam got up at 4:30 to get an early train to Sheringham. Arriving at 6:50, we found that half of the birdwatchers in Norfolk had similar plans, and settled for a vantage point on the top of the main shelters. Signs were good, Gannets were passing close in, and further out a number of Arctic Skuas were tern-bothering. As it turned out, the views were good but little out of the ordinary was seen. Two Great Skuas flew slowly west at close range, as did a Red-throated Diver. A single Balearic Shearwater was flew east, whilst an auk sp. flew west. Adam watched it for longer than I did and suggested Puffin, but without seeing the bill it has to go down as a possible. Whilst we were there a Long-tailed Skua was reported, but we didn't see it.
.
I was talking to a birder who had made the journey up from Hertfordshire (although ironically leaving not much earlier than we did from Norwich) when news that the Ortolan Bunting was still present at Cley. He kindly offered us a lift, and we fluked a carparking space at East Bank. The bunting was a smart-looking bird, which would have been worthy of prolonged views if it wasn't for the fact that only about eight people could view it at once. After having a decent look we retreated to allow others in, and returned for another hour at Sheringham. A decent day, and a first (of hopefully a few) lifer of the Autumn, all five days of it.
. 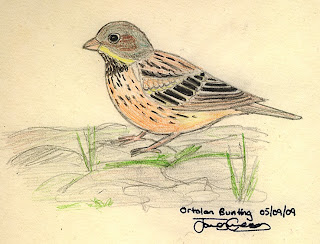 I forgot my camera, so here is a nice drawing I did when I got home.