27th September 2009
With a shortage of lifers for Gary this year, he decided to drive to Kent to look for the Fan-tailed Warbler. Me, Adam & Phil all came along for the craic, and we arrived at Pegwell Country Park around 8. The sign at the entrance told us of the "fun dog show" on that day, and we joked we should go. After 30 mins of inaction, a mini-stampede set off, presuming that someone had located the warbler. They hadn't, a dog walker had whistled to his dog, which set everyone off. That was as close as we got to a cisticola. It wasn't seen all day, except by the guy that saw a Wren in a different way to the 100+ crowd.
.
In between burgers, tea, and pointing at freaky dogs ("that doesn't count, it's a rat!", "it's got a vest, why has it got a ****ing vest?" etc etc) we did a few laps of the site and a lot of staring at saltmarsh. Some of the more interesting moments were digiscoping opportunities for Ring-necked Parakeets and Whinchats, a number of Roesel's Bush Crickets, and a Clouded Yellow spotted by Gary. A large number of Blackcaps were gorging themselves on elder berries. At 2:30, all the other birders had left, it was just us and the dog owners. They started the fancy dress competition and we left. Everyone has limits.
.
On the way back we spent two hours in Southend looking for the Ring-billed Gull. It's always there apparently. A local gave us some useful gen, it likes the area near the ice cream parlour apparently. No s**t it does. But not today. Gary picked up the same Med Gull about 5 times as we worked backwards and forwards along Westcliff seafront, and I found a Mistle Thrush, but couldn't string a White's Thrush out of it. My first twitch out of Norfolk & Suffolk, and not a successful one, but hey-ho, better luck next time.
. 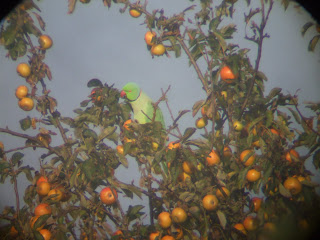