13th February 2010
.
I had an offer of a lift to Newholm to see the Black-throated Thrush, provided it stayed until February so that Gary could get his Norfolk list off to a good start. A combination of birthdays and other commitments left us with the 13th, so off we went. News throughout the week had been patchy, so we were hoping for a bit of luck. A trouble free drive up North and a Little Chef breakfast out of the way, we stopped a couple of times on the moors to look for Grouse. We didn't see any. Red Grouse has a big claim to be my bogey bird, to the point where I think they are probably just a made up bird used for marketing whiskey. A short while later we arrived in Newholm. As we parked up, a departing birder told us the thrush was showing in a nearby garden. Incidentally he became the first person I've ever met to call someone "duck".
.
Onwards then to the gardens in question, and it was a pleasant surprise to see how well stocked with bird food they were, clearly the locals haven't got too pissed off having birders everywhere. The Black-throated Thrush was showing well and was close enough to fill my 'scope view. A distinctive bird, I'm confident even I could pick one out from a Redwing flock without too much bother. After feeding for a while, it flew strongly over the gardens in the direction of a nearby headgerow. We were unable to relocate it, and after a rainshower we gave up and returned to the car. We walked past the Newholm wildlife pond, a sort of enlarged trench with a sundial in it. The only wildlife I could see was a dead woodpigeon, but they may well get a frog in spring.
. 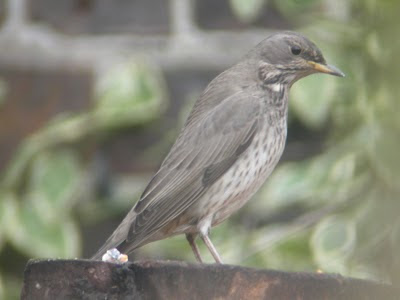 The Black-throated Thrush, courtesy of Gary White. Why not visit his website (link on the right) and marvel at his other photos?

.
Wondering what else we might be able to see whilst in the area, we decided to visit the new RSPB reserve at Saltholme. We went via the Transporter Bridge at Middlesborough, a rather odd looking contraptionm, but well worth a go at only £1.20 a pop. Saltholme actually looks very impressive, and I was pleased to see the RSPB has developed a sense of humour, the No Smoking signs were followed by "Kippers, Cigarettes, or anything else". To counter this, we were subjected to the Spanish Inquisition (and it was unexpected) by a reserve volunteer, who wanted to know if we were local, where we were from, if we'd visited before, what political party we were affiliated to, what our favourite colour was and who we thought would win in a fight, batman or spiderman. Anyway, no sign of the dubious Hooded Merganser, though we did manage 3 Red-breasted Mergs and a couple of white geese.

After a return crossing on the crazy transporter bridge (I hope the Reedham Ferry man doesn't see it in a catalogue and realise he's been sold short with his wooden platform on a chain) we zoomed back towards Norfolk. By mid-Lincolnshire we had managed to get Radio Norfolk and listen to commentary of the Norwich match, which we won 2-1, hurrah. The final action of the evening was some owl watching, but despite some calls, we only saw one Barn Owl and some Woodcock.