With more bad weather forecast, I accepted a lift up to the North Norfolk coast for a quick look around. We drove up to West Runton, where the local Med Gull watched us from the edge of the car park. It was raining again as we walked east along the beach, and then along the clifftop, but no sign of the Black Redstart. By the time we got back to the car, a small crowd was gathering under the shelter, waiting for someone else to find it (meeow!). A lone Fulmar flew west. 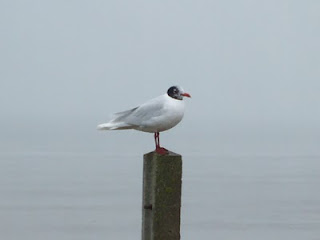 A quick look out to sea at Salthouse, but nothing other than gulls passing. Large flocks of Brent Geese around Cley, one flock being harrassed by Hares running around them. We then drove inland, seeing a female Mandarin and a Barn Owl before calling in at Foxley Wood. The paths were very boggy, but we squelched around in the drizzle nonetheless. Usual woodland fair, GS Woodpecker, Nuthatch and Marsh Tit, although I may have missed a Little Owl.
Posted by James Emerson